Know the logical side of Jasmin Bhasin Actress Jasmin Bhasin who is currently winning hearts in the house of Bigg Boss was seen giving advice to Jaan Kumar Sanu on being tactical. In yesterday’s episode Jasmin was seen talking to Jaan and she explained how he should play his own game and not be driven by others. Jasmin says “I will fight for my things. I am a sensible person. I am not a dumb person to not see who is feeding you all this.” We also saw Hina Khan telling Jasmin that she will give her a task.

Jasmin has to justify why she wants to give different essentials to specific contestants and not others. The matter escalated and Pavitra and Jasmin got into an argument. But Jasmin sorted out the matter very carefully and finished her task. When Sara, who got eliminated from the house, was seen again, the emotional side of Jasmin was visible. But surely she is in a better phase now and has understood the game of Bigg Boss. Her fans are also rooting and supporting for Jasmin a lot and they also feel she will strike back and we all will get to see the strong persona of her in the show. After the first Weekend Ka Vaar with Salman Khan, the superstar host also told Jasmin how she should face the game in a more aggressive way and not show her vulnerable side. 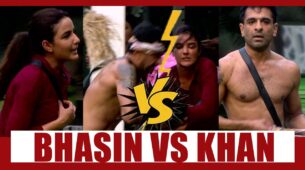