Sanaya Irani is an Indian television actress. She has stolen hearts on both counts, in soap operas as well as, as a reality TV star. Sanaya is famously known for playing the lead role of Gunjan in Miley Jab Hum Tum and Khushi in Iss Pyaar Ko Kya Naam Doon. With two most loved shows under her belt as the lead heroine, in 2015, Irani was a finalist for the 8th season of Jhalak Dikhhla Jaa. She later participated in Nach Baliye in 2017 with her partner Mohit Sehgal and won third place.

Along with being an actor, Sanaya Irani is also a fitness enthusiast. Her Instagram is proof of how much she loves traveling over the world and going on adventures.

Check out her Instagram feed, and you’ll know why she is one of the prettiest actresses and why people love her so much.

Talking about her Instagram, she has around 2 million followers on Instagram, which tells us about how much she is loved by the audience for her beauty and talent.

Sanaya Irani loved modeling and she did it for two years from 2005 to 2007. Irani’s first modeling portfolio was done by photographer turned actor, Boman Irani. She is the only Indian television actress to be listed in People Magazine’s (India) forty most beautiful women.

Sanaya Irani is known to be a fitness freak. She hits the gym regularly. Besides working out in the gym, Sanaya also enjoys yoga.

Today, she shared a picture of her and Mohit Sehgal doing yoga.

Below is the picture, have a look and share your views about it. 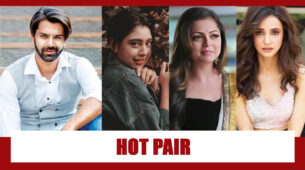