The scene at the Bigg Boss House is changing with each passing day as the relationships are constantly bearing the brunt of constant competition. After facing the immunity and entry inside the house dilemma, Rubina once again finds herself in conflict with the seniors. Adamant about treating the wardrobe items in the Bigg Boss Mall in a certain way and fighting for her basics, Rubina ends up getting into a verbal spat with Hina Khan.

The difference between their opinion strikes a huge argument that forces Hina Khan to decide against Rubina and further add to her difficulties. Making it further difficult for her, even Abhinav is seen siding others and explain to Rubina that she is in the wrong. This is an endurance task wherein the contestants are required to sit inside a bulldozer scoop while the other contestants have to pull them out of it and get them to give up. Whoever survives inside the scoop until the final buzzer is declared as the winner of this task. As Abhinav and Nikki face the challenges head-on, the co-contestants throw chilies, shaving foam, makeup, and everything available inside the house to break them and win the immunity.

Will Abhinav and Nikki be successful in saving their immunity? 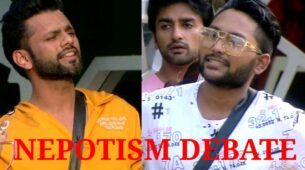