Jasmin will point out and allege that during a task, Eijaz came really close to her face. She is heard saying, ‘It shows a side of Eijaz that during the game he will physically intimidate others and cross the line.’

Eijaz will clarify his moves during tasks and state that it could be his tactic against the opponent. He would have done this to intimidate the person in front of him so that he or she commits a mistake, has a foul, and is disqualified from the task.

What will be Salman’s reaction? 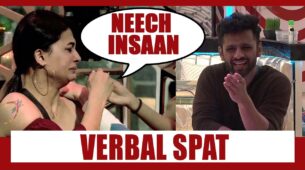