The recent episode saw a dhamakedaar twist wherein Preeta (Shraddha Arya) arrives at Karan (Dheeraj Dhoopar) and Mahira’s wedding. However, Preeta overhears Sherlyn and Mahira’s conversation wherein they decide to kill Mahesh after the wedding. Later, Preeta decides to save Mahesh’s life by not letting the wedding to happen.

However, before Preeta could stop the marriage, police enter the venue and ask the Luthras to stop the wedding.

Now, in the coming episode, the Luthra family doubts Preeta and feels that she has called the police. However, police reveal that they reached here while chasing Rishabh’s kidnapper’s boss.

Soon, Prithvi gets terrified of learning about the police and asks Sherlyn to hide him.

Will Prithvi be caught this time? 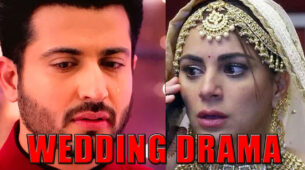