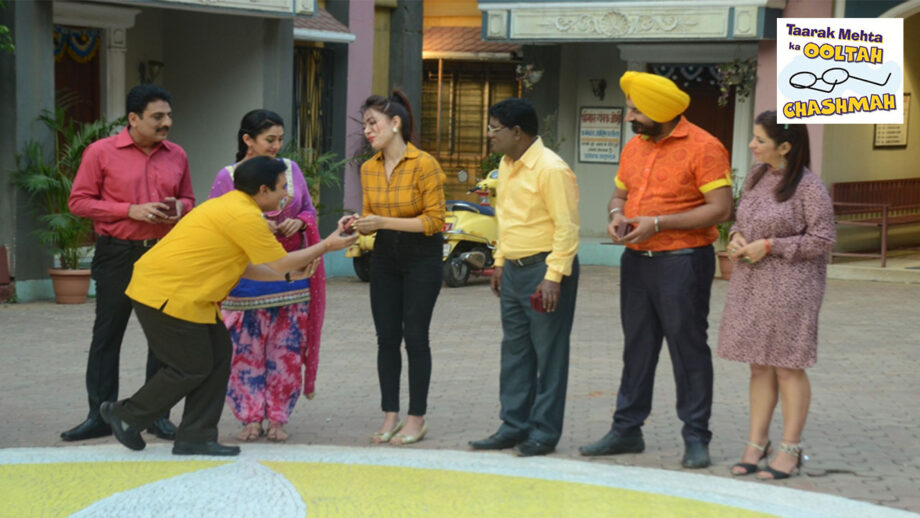 In the upcoming episode of Neela Film Productions Private Limited’s Taarak Mehta Ka Ooltah Chashmah (TMKOC) on Sony SAB, audiences will see an interesting tug of war between the mahila mandal and purush mandal over the ‘Chamatkari angoothi’. Jethaa Lal, who seems to have come under the influence of the special powers of the angoothi, orders 100 rings in bulk at a favorable discount.

Jethaa Lal asks all Gokuldham residents to gather in the Society compound for something urgent, early morning. When all of them assemble at the given time, Jethaa Lal’s order from the telemarketing company arrives. He then goes on to give Popat Lal, Nattu kaka and Bagha’s example about how they have had positive experiences post wearing the ring. He says wearing the ring will bring about positive changes in their lives and how all of them have some or the issues they are battling with. The women are easily convinced and agree to wear the ring and give it a try. The men, however, refuse to believe in the superpowers of the ring, calling it superstition and dismiss the offer to wear it.

Battle lines are drawn with the women on one side going with their intuition while the men refuse to budge believing in their reasoning power. One by one the women try convincing their husbands about wearing the ring and how it can bring about positive changes in their lives. The men try explaining it to them that all this is hocus pocus and just a marketing gimmick. Iyer even accuses Jethaa Lal of trying to make a quick buck by selling the rings to them through fake promises. Jethaa Lal assures them that he is selling the rings at cost and even if someone is unwilling to pay they can still take the ring from him. Finally, Babeeta agrees to wear the ring hoping that Iyer’s promotion, which has been held up for a long time, will come through.

Will the women convince their husbands to buy the rings for their sake? Will the men give in to the emotional blackmail or will they have the will to resist?