All the celebrity guest moments from YRKKH are here! It all started with a starry affair on the units of fashionable tv serial Yeh Rishta Kya Kehlata Hai when SRK and Anushka Sharma headed over to document a segment and promote their movie. It has been reported that very similar to their characters Harry and Sejal, the celebs will assist the present couple Naksh and Kirti discover their misplaced engagement ring. Both SRK and Anushka dance to Hawayein along with Kartik and Naira and other members of the family.

Since you have watched the show, you may simply acknowledge that the attractive title track of the show has been sung by Alka Yagnik solely. She sang it for nearly 9 years back. So, it was additionally a homecoming for the legendary singer. One of probably the most iconic playback singers of Hindi cinema, Alka Yagnik was seen within the fashionable show. She sang the original title track along with all the cast and also helped Naksh and Kirti to love each other.

Both the actors, Akshay Kumar and Bhumi Pednekar were on a promotional spree at that time. They were traveling to varied cities to promote their movie Toilet: Ek Prem Katha on different platforms. Akshay and Bhumi had just visited the sets of Yeh Rishta Kya Kehlata Hai. The stars of Toilet: Ek Prem Katha not solely shot with Yeh Rishta Kya Kehlata Hai cast but besides clicked photos with them. The smiles on their faces showed that they loved the presence of the actors. 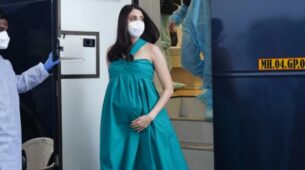