The funniest moments of Shaheer Sheikh and Ritvik Arora are here, check out! Yeh Rishtey Hain Pyaar Ke has been among one of the most favorable daily soap on TV. With its amazing romantic script, awesome cast, and the twists and turns in the plotline, the show has been among the top shows on the TRP chart and it has every reason to celebrate.

The Rajan Shahi show has been on television for more than a year and is going strong. But the real reason the show is popular among all is the real cast. We see Shaheer Sheikh and Rhea Sharma playing the husband wifey in the show while Ritvik Arora and Kaveri Priyam too play the other lead couple in the show.

Here, we are not going to discuss romance but bromance. Yes, Shaheer Sheikh and Ritvik Arora play the roles of Abir and Kunal Rajvansh in the show. Just when the show started, the cast was out for the shoot, and all the cast bonded with each other. The bond between Ritvik and Shaheer is natural. They just act like real brothers and the result is seen on-screen.

The duo shares many bloopers and BTS moments and laughs. We love to see them together enjoying each other’s company. They are funny and even when they are in the middle of the shoot, they see each other and start giggling for no cause, we guess that’s what best friends do, right?

Check out some of the funny moments of Shaheer Sheikh and Ritvik Arora:

The timing was surreal 😂 #candid @shaheernsheikh 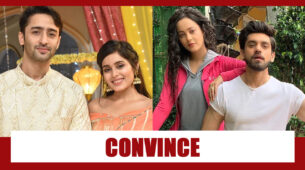