The episode of Bhabhi Ji Ghar Par Hai starts with Vibhuti asking where Bhabhiji is. Angoori comes as Chandralekha. Vibhuti says that Bhabhiji looks like Chandralekha, fabulous and fantastic. Angoori smiles and says thank you.

Angoori then asks Vibhuti what she has to do. Vibhuti says that Angoori has to walk towards Vibhuti and when Tilu comes in the middle, she has to push him.
The play starts, Tilu rings the bell. Tiwari opens the door. Tilu says that he is Chandraver and wants to meet Thakur. Tiwari comes to Vibhuti and informs him that Chandraver wants to meet him. Vibhuti asks Tiwari to send him.

Vibhuti then tells Angoori to push Tilu.
Angoori goes ahead and slaps Tilu. Tilu asks Angoori why did she slap him. Angoori asks Tilu if Tilu got hurt in one slap.

Teeka comes to Angoori and says that they are just acting. Angoori starts hitting everyone. Vibhuti orders Angoori to leave them. Angoori calls Vibhuti evil Thakur and says that she will kill him. Everyone gets scared and runs away.

Everyone goes to Tiwari’s house. Tilu asks Tiwari what is wrong with Angoori. Tiwari says that he doesn’t know. Vibhuti says that Angoori is a true artist and has gone too much into her role.
Everyone realises that Chandralekha has possessed Angoori and is taking revenge on everyone.

Later, Gupta comes to Vibhuti and says that he had warned Vibhuti, not to write a bluff story about Chandralekha or she will kill him. Gupta then asks Vibhuti to go into the library and read Chandralekha’s past story.

Vibhuti goes to the library and reads Chandralekha’s story. Vibhuti asks Gupta if there is any way to stop Chandralekha. Gupta says that they need to find the writer and asks him. 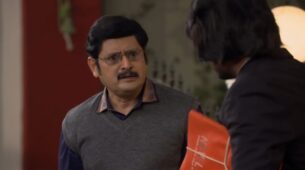