In Bhabhi Ji Ghar Par Hai Written Update Episode1448 29th December 2020, we see that Vibhuti says that he used to do all the household work and now he cannot even stand. Vibhuti asks Tiwari to give him 5crore to pay for his mistake. The episode of Bhabhi Ji Ghar Par Hai starts with Angoori watering her plants and singing a song. Vibhuti comes to her in his wheelchair. Angoori says that she is feeling bad for him.
Angoori then asks Vibhuti not to worry, soon he will be fine. Vibhuti says that he lost his legs and has become handicapped now. Angoori says that she will pray for him and also keeps fast for his strength.

Angoori then asks Vibhuti if he wants anything. Vibhuti says that he is hungry and wants Chole Bhature.
David comes there. Angoori tells him that she has cooked Chole Bhature for them and they will love it. David then gets busy talking to Angoori, and Vibhuti loses his balance from his wheelchair and falls.

Later, Tiwari is upset as because of him, Vibhuti lost his legs. Angoori comes to him and says that she cannot see Tiwari upset. Angoori then tries to distract him but fails.
Then, Vibhuti’s lawyer comes to Tiwari and says that because of Tiwari, Vibhuti lost his legs, and is handicapped now. The lawyer says that Vibhuti has sued Tiwari for 5 crores. Tiwari faints in shock.
After some time, Tiwari and Angoori go to Vibhuti and say that Tiwari is guilty of what he did, but 5 crore is a big amount, and he can never pay it. 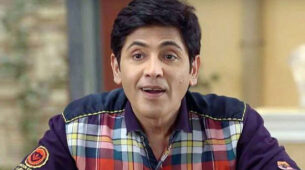