In Khatron Ke Khiladi 10 Written update 28th March 2020 episode, Amrtua Khanvilkar loses the elimination stunt due to a small mistake and gets eliminated. The first stunt is a partner stunt whereas the second one is an individual one. The episode begins with the elimination stunt and Rohit Shetty announces Adaa Khan and Amruta Khanvilkar will perform it. In this stunt, the contestant will be in a huge water tank and she has to transfer baby crocodiles and eels to another tank in the given time and the score for transferring each crocodile is 1 point whereas per eel is 3 points. Adaa Khan begins with the stunt and completes it successfully. Amruta begins it and gets scared but completes it anyway. In the end, there is a tie but Amruta made a mistake and hence gets eliminated from the show.

The second stunt is a partner stunt and the partners from each group are Karan-Adaa and Tejasswi-Karishma. For this stunt, 1 partner is locked on a rotating platform in a swimming pool, while the other partner will also be in a pool who has to lift the heavyweights and release a flag. Once the flag is released, 1st partner will start unlocking him/herself and later he/she will have to release another flag. Karan and Adaa begin where Karan is locked on the platform whereas Adaa lifts the weights. Adaa lifts it well but Karan panics and aborts the stunt. On the other hand, Tejasswi is locked on the platform and Karishma lifts the weights. The complete the stunt successfully and hence Karan-Adaa land in fear funda.

For the third stunt, Rohit Shetty declares that Dharmesh, Shivin and Balraj will do the stunt. The contestant has to stand in a container full of various creatures and has to open the nut bolts of the container. Shivin completes the stunt in 23 mins 1 sec, Balraj completes it in 16 mins 46 secs whereas Dharmesh completes it in 16 min 31 secs. Shivin loses the task and gets fear funda. 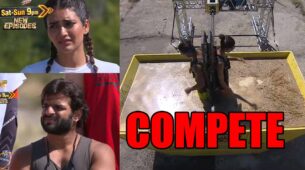