In Kundali Bhagya Written Update Episode 855 23rd December 2020, we see that Karan and Preeta get a chance to dance closer to each other. Also, a stranger comes and compliments Preeta in front of Karan. Mahira gets jealous. The episode of Kundali Bhagya starts with Karan and Preeta entering the party hall. They have a seat, and the function begins.
The host does some fun and then says that in some time they will start with some special part of the function.

Mahira hears Karan’s conversation and gets jealous when Karan calls Preeta his wife.
The stranger then compliments Preeta and says that he knows Preeta from before and Preeta has helped him a lot. Karan feels proud of Preeta, but Mahira is burning with jealousy.

Sherlyn takes Mahira out and explains the plan again. Sameer and Srishti hear the plan and inform Preeta about Mahira’s plan.
Later, the host says that they will begin with the important part of the function which is paper dance.

Karan and Preeta get on the floor and start dancing. Mahira gets jealous. Mahira then wishes that she will throw Preeta out from the stage and dance with Karan. 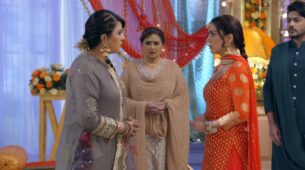