Two girls Sapna Malik and Nidhi Kumar enter. Each one gets a minute to perform, Sapna dances whereas Nidhi displays her strength. Later each one is given 30 seconds to find mistakes in each other and Nidhi’s interview ends there. Sapna gets selected for the next round.

Next Sakshi Sharma and Deepika Shekhawat enter in for the interview. Sakshi works in Punjab police force. Deepika is asked to perform for a minute and she begins with boxing and then smoothly transitions it into dance. Sakshi recites a poem to begin with and performs bhangra and Prince, Neha and Raftaar join her. Later Deepika discusses about her bipolar disorder and Neha commends her courage to be vocal about it. She reveals her rough hurdles in life. The judges explain her to let go of things and she gets selected. Later Sakshi says she wants to make it big for small-town women like her and gets selected.

After the two girls, Hamid Barkji and Tarandeep Singh come in for the interview. Hamid runs a coffee shop whereas Tarandeep is a fashion designer and works as a valet as well. Both of them perform on a Punjabi number. Hamid is asked to dance on a Bollywood song after he reveals he is a Bollywood dancer and Tarandeep has to follow him. Tarandeep tells about his late brother who was his inspiration and shows his strength through push-ups and his workout moves. Later Hamid also displays his workout moves. Both of them get selected.

The last contestant to enter is Akshita Sharma an athlete, fashion designer and a national level lawn tennis player. She is given the task to sing. She shares her idea of revolution and her contribution to it. She displays her talent through various athletic moves, splits etc. She gets selected after Rannvijay and Raftaar convince others. 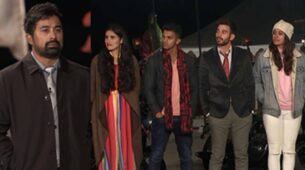