From being the lead vocalist in a band to radio jockeying to hosting a late night chat show, we look back on the early days of comedian Abish Mathew Thanks to the internet, comedy is not just confined to our TV sets these days. One just has to scroll through YouTube or Netflix to find up and coming stand-up comedians setting the stage on fire with their talented acts. And among the many comics that have managed to make their way to the top, one that distinctively stands out is – Indian Stand-Up Comedian Abish Mathew. Singer, Actor, RJ, Comedian, Talk Show Host – There’s absolutely nothing that Abish Mathew cannot do. It wouldn’t be wrong to say this stand-up comedian was born to be in the spotlight. With accomplishments that include being a part of All India Bakchod, hosting the stand-up competition Comicstaan, having his own talk show Son Of Abish and most recently with a stand-up special ‘Whoop’ that premiered on Amazon Prime, Mathew has certainly come a long way.

Here we are tracing his journey of becoming one of the most popular comedians over the last few years.

Originally from Kerala, Abish grew up in the capital and was also attracted to the stage. During his university days, he was the lead vocalist for a teen rock band called Lithium X. He was also a part of other pop bands and did a few solo gigs himself. However, he slowly realized music is not going to cut it for him.

While Abish admits he had no idea what he wanted to do except be on stage and make people laugh. After much deliberation, he landed an internship with Hit 95 FM as a Radio Jockey. During his time RJing, he learnt about stand-up comedy on the internet and was immediately intrigued by it. After understanding the concept of stand-up comedy, he started attending open mics in Delhi and even used his job at the radio to try out a few jokes. 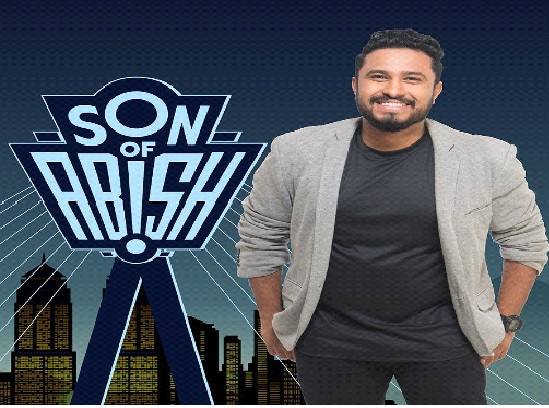 After 3 years at the radio, Mathew realized he wanted to pursue stand-up full time. He did his first event at India Habitat Centre in New Delhi called Abish and Friends. Even began a YouTube channel and uploaded a few of his clips. He then moved to Mumbai to get more performance opportunities and kept his channel running by starting a series called Pun Liners.

Mathew’s only objective was to host a talk show and so in 2014, he introduced his debut late night talk show ‘Son Of Abish’ at Mumbai’s Canvas Laughter Club. The talk show grew in immense popularity and soon he began hosting some of Bollywood’s big-wigs including Irrfan Khan, Vidya Balan, Sware Bhaskar, Sonakshi Sinha and so on.
Abish recently wrapped up the fifth season of his late night comedy show with promises of more to come!