Naveen Kasturia who will be seen in a very different avatar in MX Player series Thinkistan gets into a conversation. Thinkistan – Idea Jiska, India Uska the new MX Player series directed by ad filmmaker N Padmakumar and produced by Rajnish Lall under the banner Jigsaw Pictures is going to stream from 24 May.

The 11 episodic series which follows the graphs of two contrast characters in the crazy world of advertising forms the crux of the story. The series has a huge cast that includes actors Naveen Kasturia, Shravan Reddy, Mandira Bedi and others.

Naveen Kasturia will be seen in a never-seen-before avatar, that of the Hindi speaking copywriter from Bhopal.

This is indeed a special role for Naveen as he has never done such a role before.

Talking about it, Naveen shares, “When I meet someone and read my script, I usually do not commit to things very quickly. I met the Director who narrated to me the idea and story. I was totally sold and expressed my thought of being part of the show. I am really happy that I eventually bagged the part.”

On his character he states, “I want people to explore the story. All I can say is that Amit is a guy from Bhopal who does not know anything about English. He joins the advertising world and finds himself being a misfit. I had to go through a very different process for the series. I tried to work on my diction. My look is very different here.”

Naveen who has recently been seen in ALTBalaji’s Bose – Dead/ Alive and Sony LIV’s The Good Vibes, feels that he has always picked up roles that are close to reality. “All the characters that I have played are very normal human beings who have their own share of problems in life. In fact, I don’t think I have not done a proper comedy character yet. Even my character in Pitchers was based on the struggle that the guy had. Thinkistan will also have light moments. The show is also about the friendship of these guys. There is a lot about the advertising world. There are a lot of other characters; it is a cool, light show. Of course, there is the drama element. However, there is no dark element in the story.”

“The look and feel of the show is also very different. We have not revealed much of the costumes in the promo and that will be a great watch. The story is set in the 1990’s and this will be the highlight of the story,” he adds.

Best of luck for Thinkistan, Naveen!! 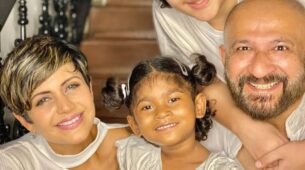