Review Of Amazon Prime's The Glorias: Brings Back The Many Personalities Of Gloria Steinem | IWMBuzz
Subscribe Now
Digital | Editorial

Review Of The Glorias 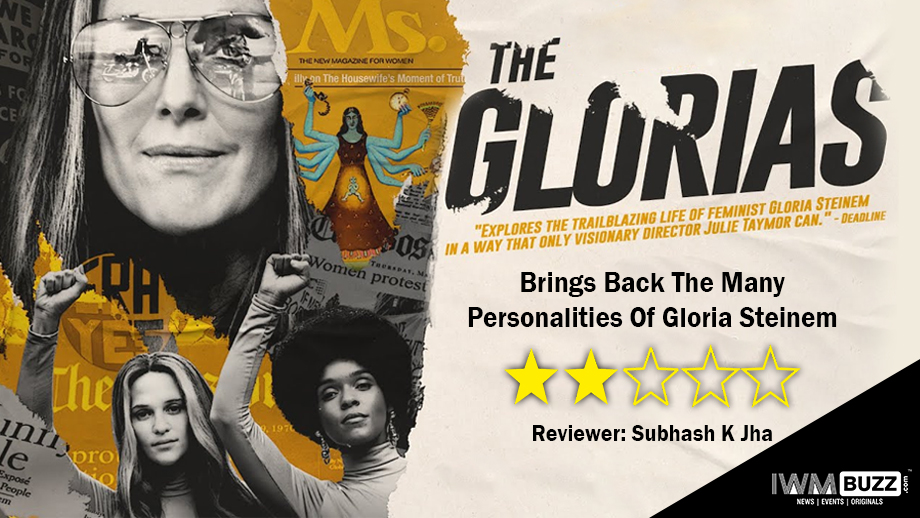 If you have followed Gloria Steinem’s feminist philosophy—and I can’t claim to have done so—this film may provide you with many moments of recollective gratification. But for those who haven’t really grown on Gloria’s fiercely self-willed activism, this film doesn’t make it any easier to understand the mind of one of America’s most complex women.

Gloria Steinem’s background suggests nothing of what was to come . Or maybe there’s something there that we need to tap into. For us who want to know more about Gloria the person and her thoughts, this film serves up an unnecessarily enigmatic dish, simmering and sizzling but not quite as appetizing as we would have expected.

The screenplay employs two leading ladies(and two younger actresses) to play Steinem. Happily both Alicia Vikander and Julianne Moore playing the younger and older version of the character are brush-stroke portraits of the real-life Gloria embodying different moods and eras with an effortless fluency that comes to only those actors who have in some way lived the life that they’ve been chosen to describe.

Alicia Vikander’s portrayal of Gloria’s Steinem’s India stint in her younger days is beautifully shot . They convey authenticity without bending backward to capture the ‘real India’.And Vikander looks more graceful in a saree than many Indian actresses.

What doesn’t work for me is when Vikander and Moore, plus the two younger actresses playing their younger avatars crowd into buses to travel together amidst freewheeling conversations on what it means to be committed a lifetime to a cause. Such a cross-generation distracting metaphor of the subject’s existential politics may be good ‘cinema’in a different more slanted context. Here we needed a more direct approach .