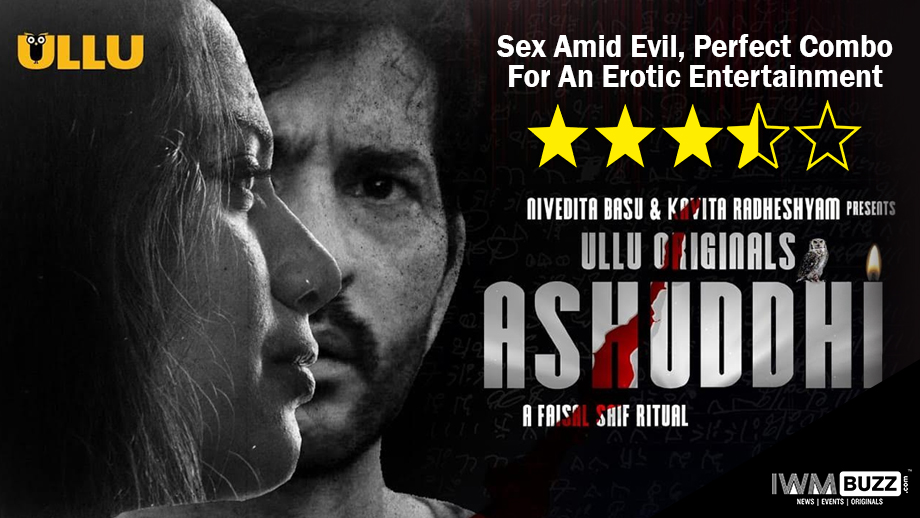 Talented actor Hiten Tejwani, Kavita Bhabhi fame, Kavita Radheshyam and newbie Chandana Gowda complete the primary casting. Kavita Ji is also the producer of the show Here reputed writer and director Faisal Saif has decided to continue with ULLU erotica format but not only has he made the shooting more classy (not full of crass sex as seen in other OTTs) but had added the element of rumoured secret society (something similar to what people call Illuminati).

As per the fiction story, these rich and powerful global satan worshipers are now infiltrating India’s elite as well including Bollywood.

To vet the viewers’ appetite for more ULLU is now dropping only two episodes every week instead of streaming all in go, as that might take away the shock value, which some time grows with time.

The first instalment tells you what to expect sex, secret society and horror elements (connect with the sacrifice to Lucifer).

The series opens with nymphomaniac Vidya( Kavita) exploiting her HR position to force a female employee into bed. She will have to keep satisfying her to get and keep the promotion. (Another angle of Me Too, what say).

Cut to struggler tube actor Karan (Hiten Tejwani) who is on the way to live as a PG in Vidya’s pad. His conversion with his cab driver who had not seen him on tv brought into sharp focus the perils of tv actors.”, There are just too many of you”, refrain from another character seals the debate.

The digs on Mumbai traffic snarls caused due to metro rail construction work will resonate with all Maximum city dwellers.

Karan moves in, and Vidya quickly seduces him as well. The lovemaking scenes have been shot aesthetically and do not make you squirm. In the middle of this Karan also get horror attack, so you know that the show is not just about the action between the sheets.

Interestingly out of work Karan quickly gets a shoot, who might have pulled strings?

For the first time, someone in desi web has dared to dwell into the dark world of secret societies so be ready for all lot more secrets to come out with which will shock you. It takes guts for female actors to lip-lock each other on screen, but kudos to both Kavita and Chandana for pulling it off with elan.

Most male actors still fight shy of doing the same.

Vidya leaves for Delhi when Karan and Marita get close. Her admission of also sleeping with Vidya shocks Karan. Guess he was old school as per her.

With primary characters established, be ready for lots of action and thrills in the coming episodes. A friend who has seen the rushes confided the same.

Also, get ready for a whole lot of dope about secret societies this the first time somebody on the web is probing into this deep dark world. Who would have thought that you still make human sacrifices in the 21 century

The fear and supernatural element will raise the thrills, leaving you gasping for more.

Old bud Hiten Tejwani is spot on as Karan, and he brings out the body language and personality of strugglers with such ease. Plus his face adds a lot of brand value to the product. Of late ULLU is changing its positioning and going for much more prominent names.

The amount of skin show is much lesser compared to the other OTT, yet oomph element is equally good.

We think there is much more to Vidya then what comes to the fore so better watch all the eps to find out more. We will surely do.

We in the TV trade also are happy to see good friend Nivedita Basu ( TV producer and very senor ex Balaji honcho) joining the party as the series presenter.

Also Read:Review Of Hubie Halloween: A Homage To The Most Moronic Tenets Of Screenwriting