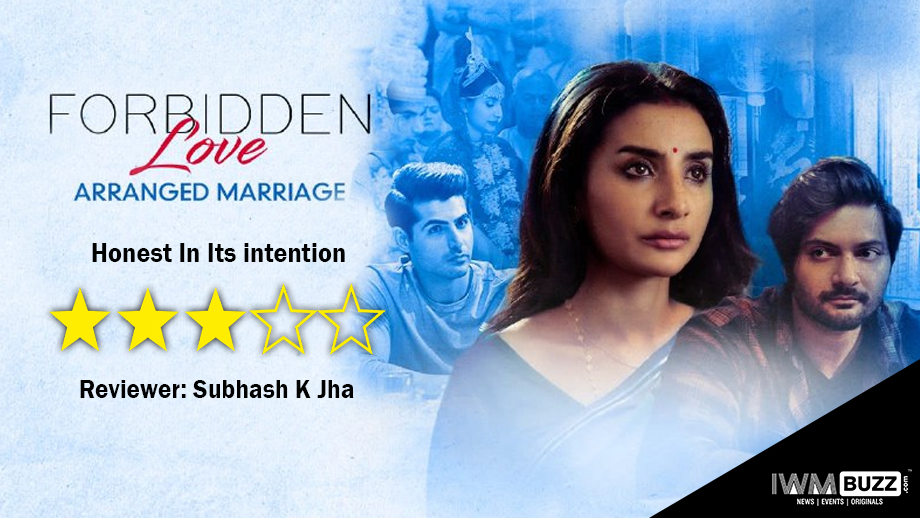 Interesting premise of a gay couple’s response to one of them getting into a conventional heterosexual marriage to keep up appearances, Forbidden Love Arranged Marriage is far more honest in its intention than last year’s Shubh Mangal Phir Savdhan which I had praised mainly because it at least dared to venture into taboo territory.

But I was wrong. It’s not enough to just go into homosexuality. A director needs to maintain a firm hold on the theme, not dithering in the exposition and execution.

In its 40-odd minutes of playing time, Arranged Marriage succeeds in bringing out the agony of two men trying to behave like “just friends” when they are lovers. Ali Fazal and Omkar Kapoor confer admirable credibility to their parts. Fazal’s Nilanjan is specially adept at conveying unspoken anguish each time he sees Dev, his Dev, showering attention on his new bride Keya.

Patralekha as the bride crammed into the closet with her husband and his lover, reminded me of Sharmila Tagore in Apur Sansar. Director Pradeep Sarkar’s Kolkata brims over with Bangla-isms…the constant obsession with food, for instance. For more than half the playing time the characters eat and talk loudly without hearing what the other person is saying.

Two major blemishes mar the impact of this delicate little film about the bride, her husband and his lover. One is Keya’s visit to a brothel with an aunt to learn sexual tricks to attract her disinterested husband in bed. Here we get a vivid closeup of a pair of bare breasts bobbing on an eager client, just as a defiant reminder that the OTT platform has no censorship.

The other irritant is the ending where a doctor(Dhritiman Chatterjee) wants to use an electric to chair to shock Nilanjan out of his homosexuality. To no one’s surprise, the shock is deflected elsewhere. There is only this much that a liberal filmmaker can do with his conscripted characters.