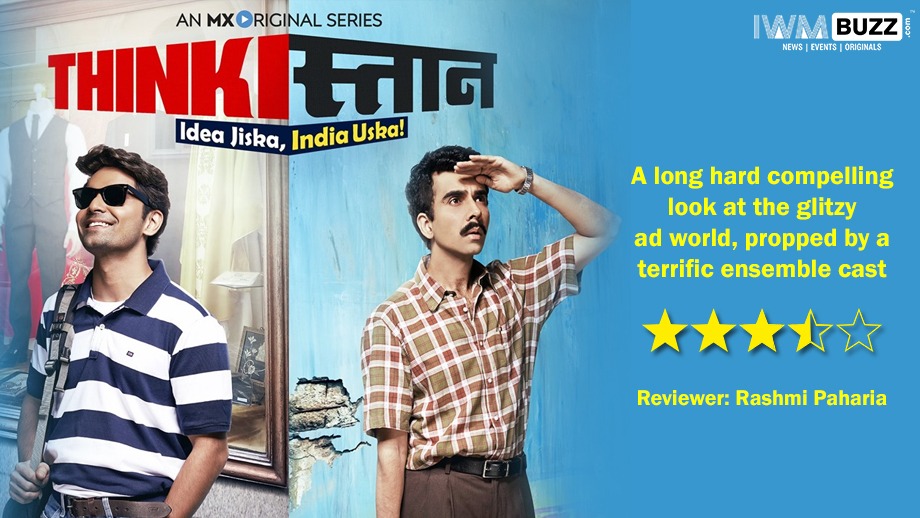 Thinkistan, India’s answer to that sparkling take on the bad, mad world of advertising, has arrived.

Ever since Mad Men made its way onto our screens and into our hearts, courtesy the advent of the plethora of streaming platforms, we’d been dreaming of a home-grown show of similar ilk, albeit soaked in the unique colours and myriad flavoursidiosyncratic to our beloved country.And must we say,Thinkistan rises up to meet the rudiments in commendable fashion.

MX Player has definitely hit pay dirt with this one, its latest. Thinkistanshines like a glittering gem in the universe of web series. The story, screenplay and dialogues of the show have been written single-handedly by erstwhile adman, N Padmakumar, aka Paddy. He’s also directed the show, while it has been produced by another adman, RajnishLall, under his banner, Jigsaw Pictures. Thinkistan delves deep into the glamorous ad world of the nineties, digging up incendiary material that is as pleasing to the mind as it is provocative in matter.

Vaguely inspired by Mad Men, Thinkistanbegins with a premise similar to its western counterpart. The glitzy, top-rated advertising agency, MTMC is going through a crisis of sorts. It is on the verge of losing its foremost client, Olemma Soaps, a la Mad Men and Sterling Cooper’ssimilar conundrum with their leading client, Lucky Strikes.

That, however, is where the similarities between the two end and the distinctiveness of Thinkistan begins. The characteristicIndianness of the story is what gives it its distinguishing touch.

Thinkistan is a story that takes a long, hard look at the glitzy world of Indian advertisingand itshighly entertaining shenanigans.Hedonistic, egalitarian and ever so slightly depraved, if we may, advertising as a profession has always been beyond the realm of the commonplace. This delineation was even more pronounced in the 1990s, when advertising was the sole fiefdom of urbane marketers; and English, the marketing language of choice.

Those were the days when vernacular, most obviously Hindi, was distinctly down-market and bias against it ran deep. Advertising honchos of every hue and ilk had perfected the secret of marketing success – make potent ads that appeal to the suave yuppie residing in the metros, complete with a commanding play on words – in English, of course. Nary was a thought spared to pander to the gratification of the robust young population residing in the hinterlands where Hindi ruled supreme.

But thensomewhere along the way, towards the latter half of the nineties, the world of advertising witnessed the rise of a new marketing language – Hinglish – that delightful mix of Hindi and English. The trend caught on like wildfireand continues to the present day, a powerful testament to its inherently enduring essence.

Thinkistan traces that distinctive shift in advertising ethos that took place in a decade defining enough to enjoy an unmatched place in the timeline of Indian advertising history.

The story goes thus. Hema (Shravan Reddy), short for a tongue-twister of a name, is a Telugu guy residing in Mumbai. He is suave, sophisticated and gifted with an innate flair for words – the kind of guy ad agencies love.Though Hema is an engineer working with a top engineering firm in Mumbai, a chance meeting with an ad exec at 3 am in the morning steers him in the direction of his true calling ­– writing copy in MTMC, Mumbai’s top ad firm.

Amit (Naveen Kasturia) is a naïve young Hindi copywriter from Bhopal, looking to make his mark in the cut-throat world of advertising in Maximum City. The disparity between the English and Hindi copywriting fields, acutely prevalent in the nineties’ advertising realm, is established in the first episode itself. AlthoughHema is a mere intern while Amit is Junior Copywriter in the company, Hema is promised a salary way higher than Amit’s. And obviously it rankles.

A series of similar instances reinforce the deep-rooted bias faced by Hindi copywriters of those days. Amit, however, claws his way into the good books of Anushka(MandiraBedi), the creative head of the agency, in large measure due to Hema’s unreserved support and help. Along the way, Hema enjoys a meteoric rise in the company by sheer dint of his creativity and resourcefulness. Resentment raises its ugly head within Amit’s bias-addled mind, even as he strives to carve out a niche for himself within the confines of his limited scope.

In addition to the inherent bias against languages other than English, the show also touches upon the elephant in the room – the sickeningly real homophobia prevalent in the otherwise egalitarian ad domain of the nineties. Akin to Mad Men, Thinkistan also sports a gay character – that of hi-flying creative director, Ashiq(Satyadeep Mishra). Ashiq is venerated in the agency for his unqualified talent, but mocked by the guys owing to his homosexuality. Ashiq’s is a character that is genteel, erudite, sensitive and enigmatic, and Satyadeep Mishra plays it with consummate perfection.

The series touches upon another vexing issue that plagued the ad scene of that era – the distinctly misogynistic, outright bullying adopted by seasoned admen against oddballs. Natasha (Meghna) is a foreign-educated junior who speaks with an accent that she just can’t help. She is bullied mercilessly and hounded into resigning by Daniel (Paul Varghese) and Sagar (Ninad), a couple of senior art directors.

The show also skims the surface of the sex-fuelled milieu of the nineties’ advertising world. In the ad world of yore, sleeping around was common, with none batting an eyelid at the adman’s questionable moral fibre, or lack thereof.

While the narrative is compelling and the premise, engaging, the best thing about Thinkistan is its terrific ensemble cast.The shows is bursting at the seams with an eclectic bunch of talented actors, the crème de la crème of the acting ecosphere,each havingput in some of their best performances ever in the series. MandiraBedi is the cream of the crop. She is incandescent and impressive in the role ofAnushka, the head of MCMT who runs it with sensitive sagacity.

Shravan Reddy and Naveen Kasturia are the heart, soul and spirit of the series. It’s hard to imagine any other actors as Hema and Amit. Their easy chemistry enthrals and pulls us into the high jinks unfolding on screen.Shravan Reddy is a sight for sore eyes. His smile, accentuated by those cute dimples, is particularly enticing, as are his thick-lashed eyes. We’re sure many a viewer, both male and female, will have fallen for him like a ton of bricks by the end of the show.

Besides the aforementioned ones, Thinkistan boasts of actors of the ilk of Anindita Bose, Vasuki, JayashreeVenkatraman, ShraddhaMusale, ShashankKarmarkar, Dibyendu Bhattacharya, Jaswant Singh, Richard Joel andRashmiSomvanshi, among others.The accomplished performances of this motley crew of actors take the show to a sublime level of perfection.

The writing is the star of the show, and delights viewers with its enthralling twists, turns and cul de sacs. But then that’s obvious, given that the show has been written by one of unquestionable pedigree. Soaked in serendipity, infused with the flavours of dramaticflourish and garnished with a hefty dose of humour, Paddy serves up a delicious smorgasbord of dazzling writing.

Thinkistan skilfully dissects the world of advertising and lays it bare on the web petri-dish, for us to reflect, reminisce and ruminate upon.We are made privy to the inner workings and machinations of the ad world, something most are unaware of. We are also treated to the conceptualization and execution of several award-winning ad campaigns, notably Fevicol, Dhara cooking oil (the one that featured the little boy and his love for jalebis), Liril soap and several others, albeit in a fictionalised setting.

The story seems to be autobiographical in parts, with several instances plucked from the life of the writer himself. Paddy was also an engineer, whose love for the written word drew him into the world of advertising. And viewerstoo are drawn into its quirky complexities, revelling in the thrill of anticipation and expectancy.

By the time one has binge-watched all eleven episodes of Season 1, Thinkistanhas succeeded, with effortless dexterity, in ingratiating itself into the heart and getting under the skinof the viewer. In the Pinterest-pressured, Instagram-influenced world of today, it is one web series that is guaranteed to bring a smile on your face.

The power of Thinkistan’s gripping narrative shines through in glorious, vivid Technicolor, like an oasis in a barren desert, beckoning viewers with its promise of storytelling nirvana. And viewers, parched for captivating content, can’t help but gravitate towards it in the hope of blessed succour.

In the meanwhile, 3.5/5 is our rating for Thinkistan.