Chopsticks is like a breath of fresh air in the suffocated digital environs of felony fables, criminal capers and cloying coming-of-age chronicles Idiosyncrasies. We all have them. The protagonists of Chopsticks, however, have more than their fair share of idiosyncrasies – a girl with a funny name and funnier mannerisms; a guy who is a full-time crook and part-time chef, or may be the other way around; a don with a soft heart and a softer corner for his goat – yes, Chopsticks definitely has more than a fair share of weirdoes crammed into one itsy bitsy movie of 1 hour 45 minutes run time. And therein lies its sole failing. It is too short a time to explore all these complex characters with some depth and gravity. Everything happens far too speedily and far too simply for it to merit considerable thought or musing.

That said, Chopsticks is like a breath of fresh air in the suffocated digital environs of felony fables, criminal capers and cloying coming-of-age chronicles. It is a sweet, eminently watchable story that makes you feel all the feels. Peppered with several laugh out loud moments and brimming with quirky characters that instantly have you rooting for them, Chopsticks is a light-hearted respite from the grave rigours of life.

It is said that the greatest love stories are built around idiosyncrasies. Nirma and Artist know and accept the other’s several peccadilloes, and slowly, a warm bond builds between them with a potential to turn into love

For those not in the know, Chopsticks is the Netflix Original Indian movie, commissioned and created especially for Netflix. Produced by Ashwini Yardi and directed by Sachin Yardi, it is an exquisite departure from the mundane and the mainstream, a definite winner from the streaming giant with a reputation to uphold. By the time it reaches the end, one is left with a big goofy smile on the face and a warm fuzzy feeling in the cockles of one’s heart.

Nirma Sahastrabuddhe is a low-on-confidence slip of a girl, who, for most of her timid life, has been the butt of washing powder jokes, courtesy her name. She is a mousy ex-stammerer, suffers from a nervous tic and listens to motivational podcasts during the office commute. The podcasts and its affirmations are as weird as Nirma is. Sample this – if life gives me shit, I will convert it into fertilizer. Obviously, the motivations get her nowhere.

She is routinely assigned the most downmarket locations in her job as a Mandarin interlocutor with the most upmarket hotel of Mumbai. So daily, she takes the hotel’s Chinese guests on touristy trips to Dharavi and Dhobi Talao, while her stylish colleagues get to attend gourmet dinners at the poshest locations in town.

Artist (Abhay Deol) is a crook-on-demand who breaks locks for a living and aspires to be a gourmet chef. He is an overabundance of idiosyncrasies. Despite having a decent name, he prefers being called Artist. He lives in a crumbling, abandoned building, in a crumbling, threadbare home, but indulges his epicurean passion in a lavishly constructed, ultra-mod kitchen that looks straight out of the pages of Architectural Digest. The difference between the kitchen and the rest of the house stands out, stark and stupefying.

Artist can break seemingly unbreakable locks with incredulous ease, by solely listening to the ‘heartbeats’ of the lock. He is also given to sardonic replies that cut a person to size faster than the sharpest words can. A more idiosyncratic character than Artist would be hard to find in Hindi filmdom.

Lastly, there’s Faiyaaz Bhai (Vijay Raaz), a soft-hearted don who punishes people in the most idiosyncratic ways. A singer who defaults on his payments is forced to become his personal crooner-on-demand. The poor guy is constantly on the phone, serenading Faiyaaz Bhai with the don’s favourite song – an evergreen number by Kishore Kumar. But most idiosyncratic of all is Faiyaaz Bhai’s love for his prized fighter goat, Bahubali. The goat is fed only the very best of organic food and is loved like a son by the flappy don.

Chopsticks is the story of a day, or several, if you may, in the life of Nirma Sahastrabuddhe (Mithila Palkar), when life turns on its head for the unassertive pushover that she is. Her new car gets stolen on the day that she drives out of the showroom with it. The police, as we all know, are an entirely useless entity when it comes to recovering stolen booty in Mumbai. Put onto Artist’s tail by a fellow conman, she enlists his help to recover her beloved car, the only spot of sunshine in her otherwise dreary life.

What follows is a delightful chase through Mumbai’s streets, down isolated alleys, into a place called CBI, aka, Chillar Bank of India (a bank where beggars deposit their day’s earnings), and finally, into the dreaded don’s den. Along the way, pushed and prodded by Artist, Nirma discovers hidden reserves of confidence and a new-found assertiveness.She even learns to cuss in Chinese, though it’s the mildest cuss word in the entire cuss vocabulary.

It is said that the greatest love stories are built around idiosyncrasies. Nirma and Artist know and accept the other’s several peccadilloes, and slowly, a warm bond builds between them with a potential to turn into love.

Mithila Palkar plays Nirma with a convincing diffidence. Every so often, she makes you smile at her naiveté and foolhardiness. Abhay Deol as the erudite and enigmatic crook steals your breath away, both with his laidback handsomeness and his sharp, brisk, no-nonsense portrayal of Artist. No over-the-top hamming for him. In a film industry glutted with the larger-than-life Khans and Kapoors, Chopsticks makes one realize the conspicuousness of the absence of actors of his ilk, the ones that are born naturals.

Vijay Raaz is simply superb as Faiyaaz Bhai. He’s perfected the art of playing the eccentric don with a laconic way of words. He’s fast cementing his place at the top of the list of compelling actors that grab viewers’ attention and walk away with all the accolades in whatever role they play. He did it in Gully Boy. He’s done it again in Chopsticks.

Chopsticks is a fascinating offering from Netflix that’s sure to perk up moods on a lazy weekend afternoon. Do watch it folks! And yes, you’re welcome!

4/5 is our rating for Chopsticks. 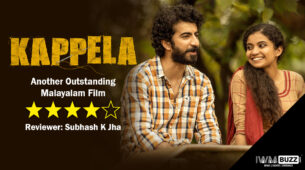