Review Of Netflix's The Serpent: A Serpentine Stunner On The Life & Crimes Of Sobhraj | IWMBuzz
Digital | Editorial

Review of The Serpent 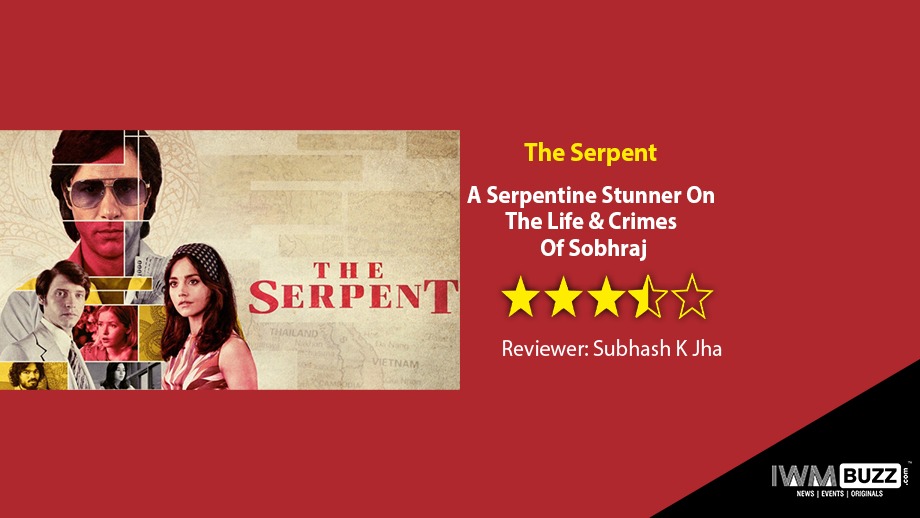 It is hard to sit through 8 serpentine episodes of The Serpent, not because the content is dull or stretched-out, but for exactly the opposite reasons.As I sat numbed, feeling a sense of growing horror and repugnance at the monstrous depravity that human beings are capable of, I kept asking myself, why one more film on Charles Sobhraj? There have been so many including the film directed by Prawaal Raman where Randeep Hooda played Sobhraj.

Tahir Rahim who plays Sobhraj in this meticulously-mounted bio-pic about a certifiable sociopath(a bio-prick?) is one of the most exciting actors in cinema today. Rahim plays Sobhraj as a stoic implacable emotionless monster, who is attractive to men and women(and there is a hint that he slept with both) because …well, everyone likes a bit of mystery in his or her dull life.

In fact this sense of acquired adventure runs through the show. There is a Dutch diplomat , Herman Knippenberg the real hero of the show played with immense sensitivity by Billy Howle(remember him in Ritesh Batra’s Sense Of An Ending?) who takes on himself the job of finding Sobhraj and his accomplices.And there is Nadine(Mathile Warnier) a neighbour of Sobhraj and his two accomplices in Thailand who takes unbelievable risks(some of them quite improbable) to help Herman nab Sobraj.

While these heroes go nabbing, you will never catch the narrative napping. Forever alert and agile, the story moves through a beguiling labyrinth of countries and eras to give us a fulsome if still incomplete picture of a criminal mastermind who used and discarded people at will.

The narrative is taut and tense, constantly clenched and on the edge giving us a feeling of being inside the criminal’s ugly head.I had a bit of problem with Tahar Rahim’s imperturbable Sobhraj. In real life Sobhraj is supposed to be a snakelike charmer. On screen he is a bit of a bully and a con artiste.And it is hard to believe so many women and men got taken in by him. Or that he was able to get away with those ghastly crimes for so long.

How could the world not see through Sobhraj’s evil designs? This is the question that haunts the series. Luckily for us the hero here is not Sobhraj, it is Herman. His relentless quest to bring Sobhraj to justice which costs his sleep, credibility and finally marriage, gives the plot a moral centre and an ethical heft which other films on criminal masterminds often miss out on.

A large part of the plot towards the end is set in India . But I hardly spotted any Indian actors except Darshan Jariwala as a hotel receptionist, Aly Khan and Pravesh Rana as cops. Casting a Sri Lankan actor Amesh Edireweera as one of Sobhraj’s accomplices Ajay Chowdhary seems a mistake. Edireweera doesn’t look Indian . He just looks evil.

Jenna Coleman as Sobhraj’s girlfriend/woman-Friday Monique is a heady mix of the vile and the vulnerable . Her outburst at the end when she tells Sobhraj she would smash any baby born of him, will make your flesh crawl. There were many such interludes in the aptly titled The Serpent where I found myself flinching away from the violence. The series takes us too close to Sobhraj’s crimes for comfort. We feel so immersed in his crimes as to be suffocated by the diabolism. In that sense this series is just what bio-pics on criminals should be. De-motivational, deeply disturbing and finally rewarding for telling why crime doesn’t pay.

5 Beauty Lessons To Learn From Chloe Moretz And Margot Robbie

This is how you can level up your fashion style in velvet outfits insp...

This is how Gal Gadot looked colourful at Sun Valley Film Festival 202...