In a world where questioning the government has become a serious health hazard, Official Secrets is a film that must be seen by every individual in a democratic or non-democratic country. What it says about the need for transparency in the power-corridors goes beyond the precincts of a cinematic experience.

As I watched Katharine Gun (significant surname, considering her lethal aim) grapple with the intimidating aftermath of a singular act of bravery whereby she exposed the British government’s collaborative designs with America to precipitate that devastating 2003 war invasion of Iraq, I thought to myself: is this woman brave or just stupid? By giving out a State secret she exposes herself to charges of sedition. But then sedition is when you act against your country. Katharine acted against the British government. There is a radical difference.

I mean, think about what would happen to her in India! Think of how much courage it takes to take on the Government. As the indomitable hero of these volatile times, Keira Knightley furnishes her character with an innermost determination and a resolve to face the consequences of her brave act.

Happily, Official Secrets is much more than a chest-thumping self-congratulatory piece of celluloid drama designed to give recognition to an unsung hero (ine). Yes, it’s suffused in the spirit of valour and conviction. But the narrative never spins into a dizzying display of show-offy daredevilry. The fears, doubts, anxieties of Katharine’s character are remarkably reified in the frames, shot in dark striking crimson hues.

The film is dark but never overbearingly so. The narrative does lean towards a spot of racy entertainment. For instance, Katharine’s chase to stop her Turkish Muslim husband (Adam Bakri)’s overnight deportation seemed like a bit of fudge entertainment in the midst of a drama that never seems doctored or dishonest.

The way in which director Gavin Hood portrays the proceedings in the newsroom of the Observer (the London newspaper which broke Katharine’s leaked information on the planned UK-US strategy against Iraq) or in Katharine’s interactions with her colleagues at her workplace, the storytelling reveals how deep is the director’s empathy with the politics of the workplace.

Besides Keira Knightley who is a force of nature as Katherine Gun, Ralph Fiennes is brilliantly reined-in as her lawyer. Incidentally, Indira Verma (remember her eons ago in Mira Nair’s Kamasutra?) plays one of the lawyers on Fiennes’ team. And Matt Smith as the Observer journalist who broke the scoop is just the scribe that this pungently credible political drama needed.

You can’t afford to miss Official Secrets. The experience of watching one brave woman take on the State is so immersive, I felt my breath being choked by powers-that-be that I couldn’t control. No one can. 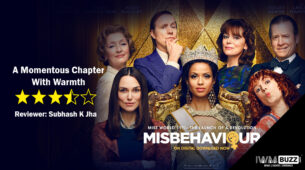