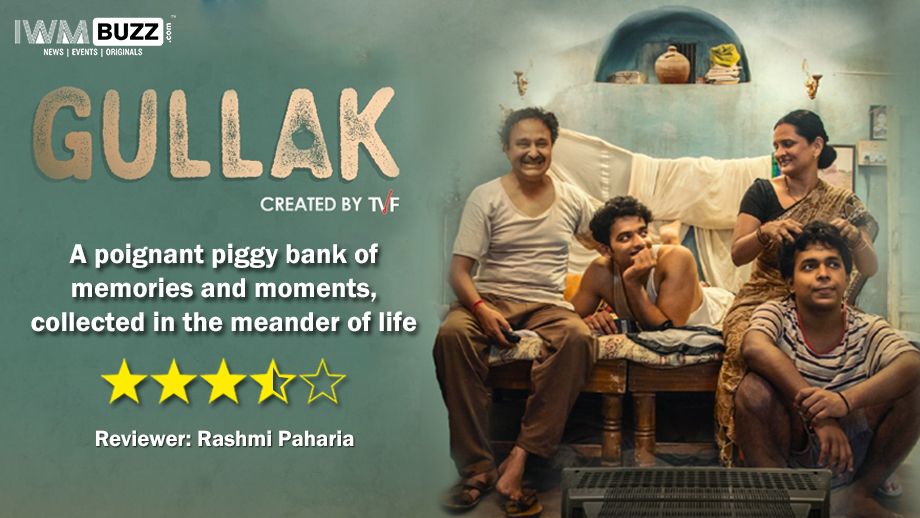 The rich collect assets. The poor collect belongings. The middle-class collect moments.Loads and loads of invaluable, irreplaceable moments that grow into poignant memories; moments they wouldn’t give away for even the most precious valuables in the world.

Weaving this enchanting quirk of middle-class India into a masterful tale of human fragility and infallibility is SonyLiv’s latest original web series, delightfully named Gullak. Fans of TVF (aren’t we all!) will be pleased to know that the show has been created for SonyLiv by TVF, the prolific creator of the best slice-of-life, nostalgia-drenched shows that abound in digi-land. Gullak is of the same ilk, and all’s well with the world!

The 5-episode series has been written by Nikhil Vijay and directed by Amrit Raj Gupta.

Gullak, as most of us know, is Hindi for piggy bank. The Gullak is a ubiquitous presence in most middle-class households. It is often found tucked away in a discreet corner of the modest middle-class home, only to find its place in the sun when the owner wants to stow away a buck for a rainy day.

In SonyLiv’sGullak, however, the piggy bank is not just a receptacle for stray coins and spare notes. It is the heart and soul of the tale, the narrator of the saga, the sole witness to the distinctly middle-class ethos that permeates theMishra household. The Gullak in the show captures the “kisse” – and not the “kahani” (the words of the Gullak, not ours) – that makes middle-class living such a giddying rollercoaster of emotions.

Yes, the Gullak of the Mishras is not the keeper of riches. It is the custodian of every moment of their simple life, which it hoards for posterity, to be called upon in fond reminiscence in all its sepia-toned glory. The whooping joys and crushing sorrows, excruciating agonies and euphoric ecstasies, jubilant hopes and overwhelming despairs – every moment is captured and kept cossetted in the all-embracing depths of the Gullak.

The Gullak, the all-important narrator of the aforementioned “kisse’, is voiced by the incomparable Shivankit Singh Parihar. His soothing voice and dulcet tone add a note of whimsy and wistfulness to the narration – wistfulness for times gone by, when life was uncomplicated and pleasures were simple.

Santosh (Jameel Khan) and Shanti Mishra (Geetanjali Kulkarni) is a middle-class couple living in small-town India, somewhere in the northern heartland of the country. The couple has two sons – 22-year-old engineer, Annu (Vaibhav Raj Gupta), who is studying to clear an important Government entrance exam, and the younger Aman (Harsh Mayar), who is still in school.

Their nondescript home is situated in a location that is demarcated by its gullies. So you have people being referred to by their gully, which seems to define their sole identity – “do number gully wali aunty” and “chaar number gully wale Dubeyji” is how all acquaintances are introduced. The Mishras too introduce themselves as “saat number gully wale Mishraji”.

It is an oddity that adds a unique flavour to the town and location the Mishras live in.It is within the confines of these criss-crossing by-lanes that bourgeois families build their dreams, hopes and desires. It is the rich, vibrant character of these by-lanes that small-town, middle-class India thrives on.

Gullak comprises of five episodes, each more captivating than the other. The goings-on in every episode are eminently relatable and realistic. We can bet you’ll identify with some, if not all, of the high jinks that take place in the home and hearth of the Mishra family. And Gullak tells the tale with humongous doses of humour thrown in for effect. The Mishra family’s shenanigans make you laugh out loud more often than not.

The premise of each episode is common-place – siblings fighting like cats and dogs; a glorious Sunday morning shaping up as anything but, due to a petty fight between husband and wife; and the most emotional of them all – the last episode, which proves in no uncertain terms that a content family is one where each member of the family has the other’s back, where each looks out for the other. The raw emotions on display in the episode brought tears of familiar joy in the eyes of yours truly.

The Mishra family, like any other middle-class family in the world, quibbles and quarrels with fervour, but then makes up just as quickly and enthusiastically, as if the fight that just took place was a mere figment of our imagination. Along the way, it gives you a warm fuzzy feeling within, and at the same time, makes you reflect upon a few time-tested certainties of life.

Gullaktells its tale in a simple and straightforward way, but infused with warmth, wonder and wit; and therein lies its strength. It compels us to invest our emotions into the Mishras’ average life, leaving us sitting there, staring at our screens, smiling goofily and rooting for the middle-classness of this simple family.

The series is well-written, with each character etched out in great detail. The story brings out the small-town ethos with absolutely flawless perfection. Purportedly a comedy, it leaves you spell-bound with its hint of emotional pathos. It is narrative-oriented, rather than a haphazard hash of anecdotes. There is no stifling hierarchy– all the characters are in it together. Each character has its space under the sun. When you watch them together, you can feel their love and concern for each other in your gut.

Every member of the cast has put in a splendid performance – no OTT melodrama, no pretence and no hamming– just goodol’ straight-from-the-heart acting. The standout element of all four actors is their flawless adoption of the North Indian dialect. The dialect plays a spectacular role, lending a remarkable flavour to the series, without which the story wouldn’t have had half the impact on viewers as it does. And each character gets it bang on target.

The writer-director duo of Nikhil Vijay and Amrit Raj Gupta displays immeasurable finesse in steering this wonderful tale of a family and its mundane issues. They paint the canvas of their story in stellar, masterful strokes of deft story-telling.

The series is a nod to the unsophisticated middle-class lifestyle and artless ethos of a stratum that forms the bulk of society. It is a nod to the life of people like you and me – mediocre, but elevated to magical by the unconditional love of family; people who collect memories, not riches, in the piggy bank of life.