Review Of Soorarai Pottru: Is Everything Cinema Should Be | IWMBuzz
Subscribe Now
Digital | Editorial 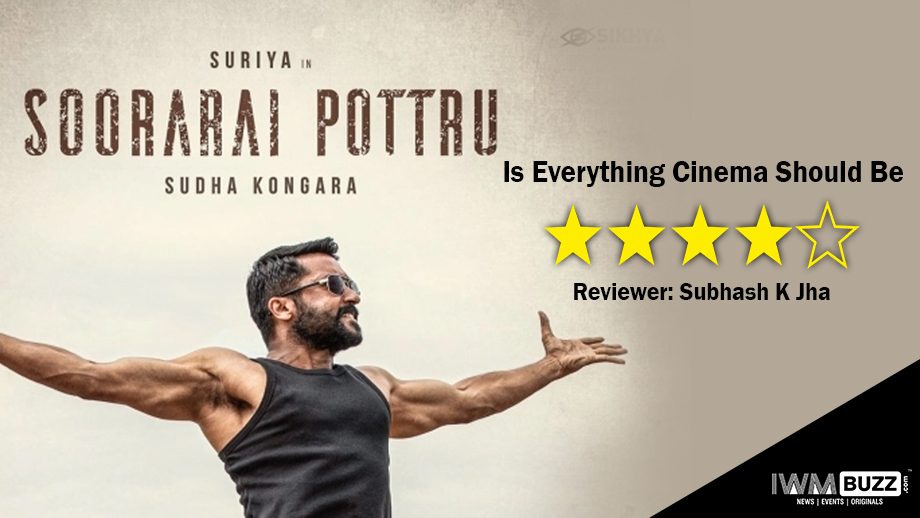 Emotions run high when Maara(Suriya)runs out of money to pay for his business-class ticket to reach his father’s deathbed.In a film that captures the essence and value of impatience Maara is running short of cash…and time. As he frantically goes around the departure lounge of the airport requesting passengers to loan him the money, we realize with a shock what drives dreamers into acts of impossible audacity.

It’s the will to open gates which are closed for the non-members .As Maara Suriya pulls out all stops.Indeed Soorarai Pottru is a bio-pic that knows no full stops, just like its protagonist who can go to any lengths to achieve his goal. Director Sudha Kongara erects an edifying edifice of hope, aspiration, dream , disappointment and eventual victory.

As far as films about defying all odds are concerned, this one takes the cake, and the bakery. Speaking of which, Maara’s better-half Sundari played with feisty energy by Aparna Balamurli,wants to consolidate her bakery business. So she cuts a deal with her husband.He will fly his plane she will cater her cakes on flight. Deal? Let’s shake on that. Or better still a tight hug. The advantage of doing business with your wife.

This is a film that hits all the right notes, and doesn’t shy away from the tropes. As a wise man recently said , it’s not about the tropes, but what a filmmaker does with them. Sudha Kongara is very clear in her intentions. This is a Suriya film ,and so it is designed with all the expected bombast and braggadocio associated with the star. Suriya, God bless his productive superstardom, has all the best lines and scenes in his confrontation scenes with airline tycoon Paresh Rawal whose obviously dubbed voice gives nothing away except pure one-dimensional evil.

It’s a simple deal, really. If you must have a Superhero, then you must have a villain to match. I wouldn’t say Rawal matches Suriya’s wit with the whims of one-upmanship except for one key sequence midair where Rawal turns a plane around to spite Suriya saying, “If you own a business-class ticket I own the plane.”This must be the only scene for which Paresh rawal must have agreed to play the cardboard villain.

The odds are laid out very clearly. This is a film about a Super-hero who wants to fly the poorest of the poor. As he tells the on-screen Vijay Mallya, “You are a socialite . I’m a Socialist.” Having enunciated the film’s pop-politics so equivocally , Soorarai Pottru vividly assembles scenes of impoverished men and women taking their first flight into fancy. These are stuff that aspirational cinema thrives on. This film takes the audience uncommonly deep into the rudimentary dreams of the Common Man.

This is Suriya flying business-class in a film about flying economy. Too bad, his co-star Aparna Balamurli steals almost every scene from him when they are together.Women, I tell you! They must be kept at home to make cakes. Otherwise one of them goes out and makes a film like Soorarai Pottru which makes all the male filmmakers of the country break into a cold sweat.Why didn’t they think of making a film on the king of budget aviation Captain Gopinath? Why so many bio-pics on gangsters and serial killers? Why not more Gopinaths?