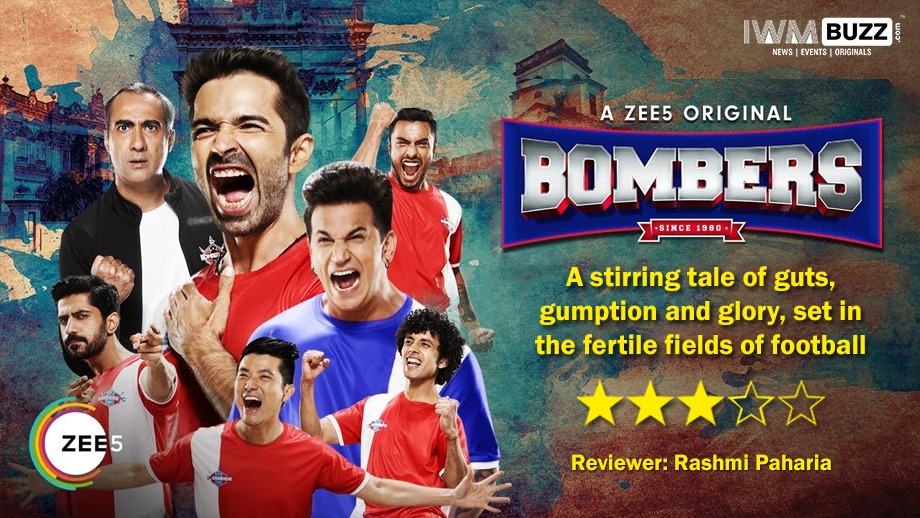 The shimmering, radiant Phoenix burst into flames and soon, all that remained of it was a heap of ashes. But lo, out of the very same ashes of destruction rose the majestic Phoenix – renewed, revitalised and ready as ever to reclaim its place as the most magnificent bird in Paradise.

Ever since, the Phoenix has sealed its place in the legends as a potent symbol of renewal and resurrection; and also as a symbol of the exceptional power commanded by the strength of will – the determination to rise again, come what may, from the ashes of destruction.

Bombers FC are the Phoenix of Zee5’s latest web series, the eponymously named, Bombers. The 10-part web series is the story of Bombers FC, a football club of Chandannagore, whose journey to football glory ends when disaster strikes – the team bus meets with a devastating accident. All but one of the team members perish in the accident.

Captain of the team, Badol (Varun Mitra), is the lone player to survive the catastrophe. His survival comes at a cost, though. He is gripped by anxiety and debilitating nightmares of the incident and has to take recourse to medication to fight off the demons in his mind.

The premise of Bombers has been plucked from the annals of several such real-life tragedies, including the most recent one when almost the entire Brazilian football team, Chapecoense, was wiped out in a plane crash in 2016. Similarly, well-known football club, Manchester United lost eight members of their team in the Munich air tragedy of 1958. Legendary English footballer, Bob Charlton, was a lucky survivor of that disaster.

Bombers has been jointly produced by Horseshoe Motion Pictures and Banijay Asia. Written by Vishal Singh and directed by Vishal Furia, the series streams on streaming platform, Zee5.

The first episode of the series is aptly titled ‘The End’. The accident happens within the first five minutes of the series and existentially at least, it is the end of Bombers FC. Even before the town of Chandannagorecan make its peace with the tragedy, Manik Dasgupta (Anup Soni), the West Bengal Urban Development Minister, moves in like a vulture to grab the club’s grounds. He has grandiose plans to build a glitzy mall on the premises, hand-in-glove with an influential politician whose son-in-law is the potential builder.

What follows is the story of the grit and gumption of a few brave hearts who staunchly believe that the club, or whatever remains of it, can be rebuilt and resurrected, to reclaim its lost glory in the West Bengal football league. Foremost among these is the club and ground’s owner, Somu Da (Zakir Hussain), who moves mountains to piece together a team with the potential to revive Bombers FC.

He first mobilises Badol, then several youngsters with football promise and, finally, a new coach for the team, to join him in his mission to rebuild Bombers FC. Viewers may be reminded of Akshay Kumar’s similar endeavour in Gold, though Bombers is not even a patch on that hit flick.

Badol gives up a cushy appointment in a Mumbai football club to take his place as Captain. He is also the one to zero in on Debu Da (Ranvir Shorey), a former delinquent Bombers player and current alcoholic, to coach the new Bombers team.

The motley crew of players that Somu picks up to play for Bombers is an infinitely interesting bunch.

The team that finally takes shape comprises of a bunch of individuals, as gifted as the next, but with origins as diverse from each other as an octopus is from an orangutan. There’s a waiter, Tokai (Meiyang Chang); a delivery boy for an Ecommerce company; a petty thief and jailbird, Toto (Shivam Patil); a closet gay, Mithun (Ali Tahir); the scion of a political party, Shiva (Rohan Rai); and the most intriguing of all, Arjun (Danish Pandor), a prostitute’s son from Sonagachi, India’s largest red light area.

More than anything, this extraordinary diversity proves that there is no greater leveller than the game of football, in a variegated society like West Bengal’s.

Coalescing into a team that slowly comes into its own, Bombers FC takes on the might of a self-seeking management that believes more in the building of swanky malls and less in the well-being of its community. Subsequent episodes chronicle the initial disappointments and then the breath-taking resurgence of Team Bombers FC. Six episodes of the show have been released so far, with four more to go, including the grand finale, slated for 10th July.

An interesting device has been used by the storytellers to narrate this tale of redemption and resurrection. Anandita, aka Andy, (Sapna Pabbi) is a journalist who comes down to Chandannagore to document the stunning revival of a team the entire world had given up for dead.

The story unfolds through the prism of her endeavour – through the numerous chats, talks and interviews she has with the key stakeholders, including Sanjana (Ahana Kumra). Sanjana isBadol’s ex-girlfriend and prime witness to the trials and tribulations, the guts and glory of Bombers. Andy even chats up Manik Da, to get his side of the story.

Consequently, the narrative flits between past and present, as Andy puts together the galvanizing story, piece by piece, interview by interview.

The star of the show is unquestionably its brilliant casting. Each carefully-chosen performer delivers spectacularly at every level of the narrative, breathing life into the character they play. Varun Mitra is superb as Badol, as is Ranvir Shorey as the ex-footballer striving for a last shot at redemption and glory.Gifted with the uncanny ability to slip into any character’s skin with chameleon-esque dexterity, Ranvir is one actor who’s matured with every subsequent outing.

Anup Soni puts in a compelling portrayal of the mean-spirited politico. The character is not outright evil, but its negative connotations sit well on Anup and his bearded look. Nevertheless, we still prefer to watch Anup in a positive role. Maybe it’s something to do with his aura and good looks, what say?

Zakir Hussain brings his trademark acting skills to his role, infusing into it the passion and the pathos required of the character. The series also features Prince Narula as a top Bangla footballer. His role hasn’t developed much as yet. Maybe he’ll have more to do in later episodes. Flora Saini too makes her presence felt in a bit role.

The anthem of the series is a thumping, foot-tapping number. It makes for a supremely inspiring and invigorating bolster to the narrative.

If there’s one thing the series misses sorely, it is powerful dialogues. The dialogues are dull, unimaginative and absolutely uninspiring. Let alone inspire a bunch of rookies to win the tough West Bengal football league, the dialogues of Bombers will make them scurry back into the rabbit hole they came from, and pronto at that. Yes, they’re that bad.

Another thing that we were looking for, but failed to find, is the stirring half-time speech – the hallmark of every great sports drama. The soul-stirring, galvanizing half-time locker room speech is the stuff great sports productions are made of, and what is profoundly missing in Bombers. It is what separates the wheat from the chaff – or – truly inspiring shows from the also-rans.

In the meanwhile, 3/5 is our rating for Bombers.