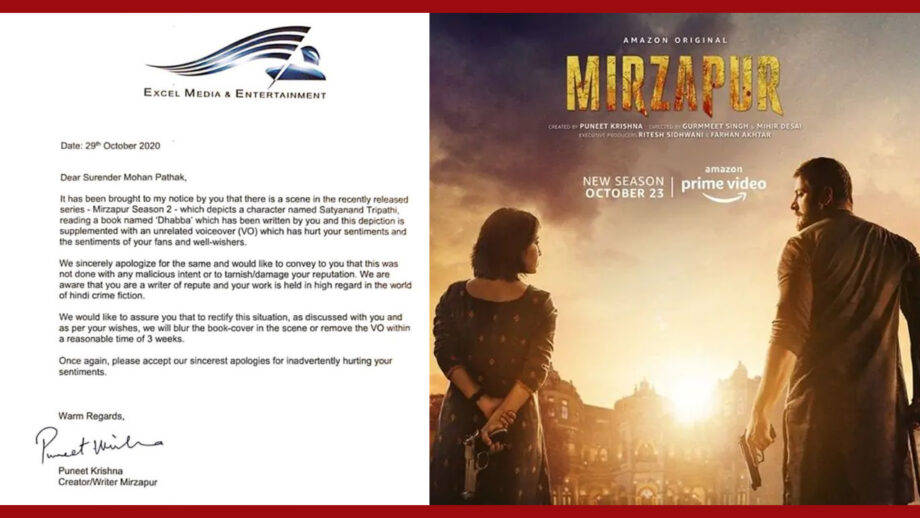 The most absurd and unreasonable thing that a scriptwriter can do is use the names of books and movies as props in an inappropriate context. Uttar Pradesh’s 81-year old popular Hindi novelist Surendra Mohan Pathak was shocked when he saw his bestselling crime novel Dhabba in the disappointingly slapdash sequel to the webseries Mirzapur.

Neither the producers Ritesh Sidwani and Farhan Akhtar nor the Mirzapur writers had approached Pathak before using his novel in their series.

“I had written none of what was attributed to me by the voiceover in Dhabba. Imagine a generation that is not familiar with my work seeing and hearing what is credited to me Mirzapur.!They will think I am a sleaze writer,” says Pathak.

Imagine if the audience enters to see Ritesh Sidhwani and Farhan Akhtar’s Dil Chahta Hai when suddenly a scene from Kya Kool Hain Hum begins to play. How would they feel?

It is not only wrong to infringe on the creative domain of any artiste, it is a criminal offence to use anyone’s creative output out of context. What a shame that enlighted producers like Sidhwani and Akhtar don’t know the basic rules of generating content.

Excel Entertainment has issued an apology and has promised to rectify the monstrous error in three weeks.

Three weeks? When the entire world would have already seen what’s been done to the name and reputation of a well-known writer? Whom are they kidding?