Our company’s agenda is that even if we are doing little work, it has to be good work: Shubham Gaur, Casting Director, BOSE: Dead / Alive | IWMBuzz
Subscribe Now
Digital | Personalities 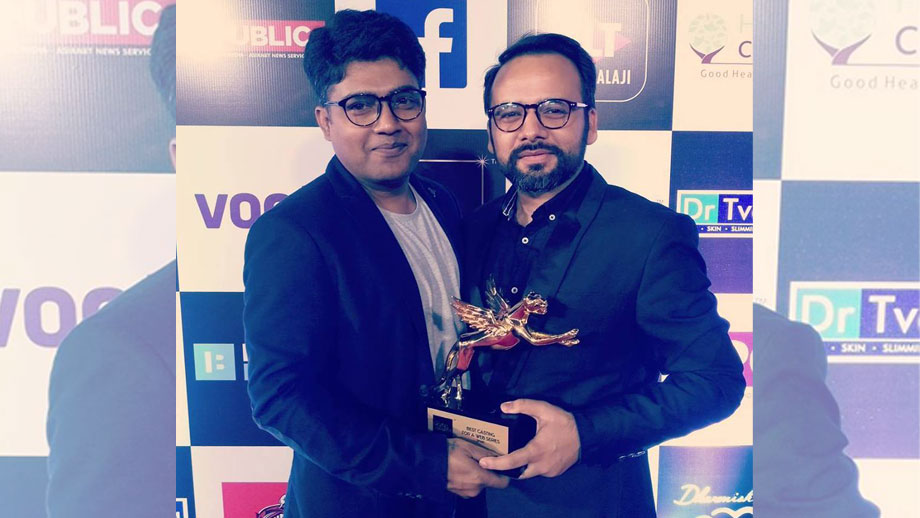 From being one among the very few Indian Casting Directors to have access to the Casting Society of America to being the first Casting Director duo to bag an award for Best Casting on the digital medium, thick friends and partners at work Shubham Gaur and Trishaan are literally living their dreams, doing what they want to and are good at!!

Yes, we are talking about the men who cast for the hugely successful ALTBalaji web-series, BOSE: Dead / Alive!!

To tell you more, Shubham and Trishaan won the IWM Digital Award for The Best Casting Director at the recently held first-of-its-kind digital awards, organized by IWMBuzz.com

IWMBuzz.com got into an an exclusive interview with Shubham Gaur…

Tell us about your early days in the industy?

I hail from Meerut and moved to Mumbai 11 years back. In the first two years of my working tenure, I served the post of Assistant Producer. Post that, when recession hit the market, I did lot of voiceovers to earn my bread. My career kick-started when I got the opportunity to work in Yashraj Films as the Assistant Casting Director. At that time, Abhimanyu Ray was the Casting Division Head and Bhumi Pednekar was my immediate boss.

In the year 2011, I left YRF. This was when I met Seher Latif, who was one of the few Indian Casting Directors who casts for International films. She gave me my first movie in Lunchobx. I had one of the most enjoyable times of my life working on this film. Then came the movie Million Dollar Arm by Disney which was an Indo-American feature. After that, I worked on Sense8, directed by Wachowski Sibling of Matrix fame. All this was for Netflix and this was my first experience for a big TV series.

We later did Homeland 2, Jungle Book, Viceroy House etc. At this time, I started my independent work too with writing. Then came the features, Waiting, Banke Ki Crazy Baraat.

When I was doing Sense8, I got associated with Trishaan. We worked for Seher for about 5-6 years. Around last year, we decided to take a leap. We combined and started a company called Indian Casting Company. Our first feature working together was Hotel Mumbai which was based on the 26/11 attacks. The movie will release this year. It’s produced by Wynstein Company.

BOSE which happened to us opened up a great opportunity for us. We also recently finished the web-series for Amazon Prime, 4 More Shots Please. This is the crème work that we have done, apart from which there are tons of ads and other work that we have cast for.

Trishaan and I are one of the few Casting Directors in India who have access to the Casting Society of America. We can outsource actors from LA, California if need be.

Tell us about your partner Trishaan…How is it working with him?

To tell you, Trishaan is an FTII graduate and is a splendid actor. Trishaan is his screen name, and Amit Sarkar is his real name. Trishaan and I are one of the few Casting Directors in India who have access to the Casting Society of America. We can outsource actors from LA, California if need be. It’s been fun because the kind of screenplays we have worked on in crossover features gets you to enjoy the whole process. They are so well-written that you get to choose the kind of work you want to do.

I have a writing background and kind of enjoy the process. Trishaan has learned the craft of acting from FTII. He’s done theatre with the best of people like Benjamin Gilani etc. He knows how to get the actors compfortable. We sort of fill the gaps for each other.

Since I have been part of the Mumbai hub, most of the projects I can outsource from our fraternity, I do that. He has a strong hold in the outside space, so he outsources the International projects. We work closely in this manner. Since we have the access to outsource people from outside, we can call them for test. Also, everything is so organized abroad that we can take help from agents who can get their tests recorded in a very professional manner. Until and unless a project requires us to go outside and test, we usually take care of everything from here itself. How different is it to work for a feature and a web-series?

Working on a feature and working for web content has a big difference. When you are casting for a feature, the casting director is in direct touch with the director. There is no obstruction in between, but in the web, there are many other people involved. In a film, the director educates the casting director so much about the characters. To tell you, testing for a film happens with its own process. We test a person for more than an hour or nearly two hours, just to extract the kind of performance from him. This is because we are pretty sorted with the people we are calling to test. Working for International Films is pretty organized as they have a clear setup as to how they want to go about the auditions. Once the short listing happens, the director flies down from abroad and meets the actors and gives them half an hour based on which the final selection gets done.

We have become the first casting directors to be acknowledged on a level like this. I deifinitely thank IWM for considering us.

Tell us about the experience of casting for ALTBalaji’s web-series BOSE: Dead / Alive? Above all, how was it to bag the IWM Digital Award?

It was so uncanny that I read sometime in January this year that Filmfare is starting to come up with a category for Best Casting Director for a Feature. We were pretty thrilled that finally somebody is thinking about this department. There is so much that goes into the casting process and it was high time people made note of it. 2 months down the line, I got a call from IWMBuzz that we were nominated for the Best Casting Director Award in IWM Digital Awards. We really thought someone is pulling our legs. But later, we got to know from our Director Pulkit that BOSE actually had got 18 nominations for the IWM Awards and we were in the list.

To tell you about the casting process for BOSE, nearly four and half months went to cast about 163 characters for BOSE. And to tell you, 46 characters in that were British. So it was actually a task to outsource British actors in India. We had to outsource a range of actors from Poland, Kolkata, Thailand etc for BOSE. It was quite a challenge and we are happy that the series did really well.

As for the award, essentially this is the first time that something has been organized where the Casting Director category is involved. We have become the first casting directors to be acknowledged on a level like this. I definitely thank IWM for considering us. We want to work harder. I really hope we do good work both on the web and feature. We are hungry to work with good directors. Where there is clarity, so much of your work becomes easy. Working with Pulkit on BOSE was a treat. He was such a motivator that he even pushed me to act for a scene.

Tell us about the USP of your and Trishaan’s Company, Indian Casting Company?

Our Company’s actual agenda is to do more and more features. On the web, we want to be more specific with what we want to do. For the feature, we are really tapping at the kind of people we want to work with and the kind of people we are connected to. We are famous for the kind of extensive auditions we take. We take time for things to happen. We send scripts two days before the test, to the actors. We want the actors to be sorted with the lines. We talk to them to educate them as much as we can about the character. Our company’s agenda is that even if we are doing little work, we do good work.

Working with Pulkit on BOSE was a treat. He was such a motivator that he even pushed me to act for a scene.

What are your ultimate goals?

Well, we definitely enjoy working together. Our essential goal is to keep this going. I will want to write great stories and get to direct them too. I always love to narrate stories. While the whole process keeps happening, I parallely force myself to write for atleast an hour or so daily. I condition myself to write daily. You could have travbelled the world, but if you don’t ideate, stories don’t come. I have written two stories, and want to direct them this years as short films. Within a year and half, I intend to start pitching my feature concepts as director.

Trishaan will also want to do the kind of work he wants to do. He is trying to stop ignoring the fact that he is also an actor. He has starred in movies like Sense8, The Viceroy House. He has also been part of the British India series that we did, Net Mafia.

So we will continue to do what we are good at. At the same time, our company will keep on growing. We have always enjoyed our casting work. We have atleast two or three people we trust as associates. So even if we are engaged, our work keeps happening.

Tell us about the work that you have in the immediate future?

We have the film Bioscope Walaproduced by Sunil Doshi to release. It is an extension of the old Kabuliwala. Where Kabulwala ends, this story starts. So it was fun casting for this. Chaman Bahar, another feature is about a Panwadi from Raipur. His favourite film is Raja Hindustani. And his analogy is that if a driver like Raja can get a wife like Aarti, he too can get one in Raipur. It is a film set in a very quirky space. Also we have Hotel Mumbai, the feature on the 26/11 attacks which will release this year, exactly on the10th anniversary.