The South African cricketer talked about a prank he pulled off in the chat show. Cricketers rejoice! AB de Villiers is one of the few international cricketers who is equally loved by our Indian audiences. Just as he never fails to impress us on-ground, likely in real life he has some interesting stories to share.

In the first episode of Viu India’s ‘What the Duck’, AB de Villiers and Jonty Rhodes, the South African cricketers, spilled some beans from back in the day.

AB de Villiers in conversation with the host Vikram Sathaye, shared his relationship quotient with the former South African captain, Greame Smith and how he pulled off a practical joke with him at that time.

He quipped, “There was this one time when I was too bored and wanted to have some fun. So I decided to pull a prank on Greame Smith. I sneaked into his hotel room at night when he was not there, displaced some of the furniture around and left the television switched on. I wanted to make Smith believe that there is some paranormal activity going on in his room. Much to my amusement, he did get scared. It was too much fun. I can never forget that night.”

Ab de Villiers’ hilarious prank story is relatable to any of us who just want to have some fun. To catch on more such fun-filled stories from your favourite cricketers’ life, stay tuned to Viu’s ‘What the Duck’.

The first episode of  What The Duck will stream on 21 May. From AB de Villiers To Mahendra Singh Dhoni: These 5 Cricketers Should Play Beyond the Age Of 35! Jonty Rhodes Vs Paul Collingwood: Who Was The Best Fielder In Cricket History? Times When Jonty Rhodes Created History with His Fielding Skills 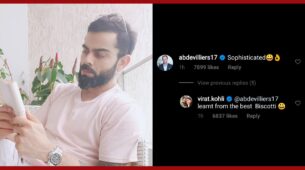