Check out these amazing hairstyles by Chris Hemsworth to experiment with! The Australian Hollywood actor, Chris Hemsworth has made everyone stunned with his fabulous acting skills. He has mostly been spotted in the action movies till the date. Chris Hemsworth is well known for his role as Thor in the Marvel Cinematic Universes (MCU) Avenger movie series. He has recently appeared in the action-thriller movies named, Extraction (2020) which has got a very good response. Chris Hemsworth is no doubt a hardworking and dedicated actor, but other than that he has inspired people with his style as well. The man has influenced men’s fashion heavily with his fashion statements.

Chris Hemsworth has become an inspiration for many men. Not only in the case of outfits but he has also inspired many with his hairstyles as well. He has been seen experimenting with his hair a lot. Chris has been spotted in different types of hairstyles – from long to short. Be it a long shoulder length hair or a messy crop, he has looked handsome in all of them. Chris Hemsworth has been spotted highlighting his hair as well, and changing hair color sometimes. If you are looking for some hairstyle inspiration, then he is the right person.

Chris Hemsworth has got a great collection of hairstyles. Depending on the color and length, you can choose one for yourself too. Have a look at these amazing hairstyles of Chris Hemsworth that you can try out with your hair!

Not a bad day in the office, getting out of the city finding some surf right near NY. #BOSSBottled

Just another day on the set of MIB. Italy you’re too kind 🙏👍🤙

Cheers to @esquiresg for the great interview and cover! #BossBottled

First look at Bad Times at the El Royale, in cinemas this October and trailer is coming soon. It was one of the best scripts I’ve ever read and I can’t wait for you all to see it. Written and directed by Drew Goddard (one of the best humans goin round). ⁣ ⁣ Set in the 1960s, seven strangers, each with a secret to bury, meet at Lake Tahoe’s El Royale, a rundown hotel with a dark past. Over the course of one fateful night, everyone will have a last shot at redemption – before everything goes to hell. @elroyalemovie @thejeffbridges @dakotajohnson @cynthiaerivo #jonhamm @caileespaeny #lewispullman and many more

I remember many years ago carving my name into wet concrete on the sidewalk outside my grandmas place, little did I know that years on those skills would come in handy! Honoured to share this moment with my Avenging mates on the Hollywood Walk Of Fame 🙏🤙👍🕺 @avengers @marvelstudios @markruffalo @robertdowneyjr @renner4real #scarlettjohansson #chrisevans #kevinfeige @therussobrothers

Not sure why everyone’s so worried about Thor, he’s fine guys… 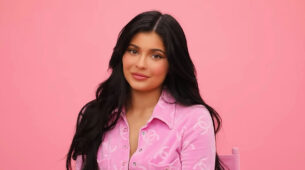 Kylie Jenner's Style: 5 Gorgeous Hairstyles For All The Brides-To-Be