Subhash K Jha reviews the trailer of Jawaani Jaaneman, and opines. Read here to know what he feels.

I love watching Saif Ali Khan and Tabu on screen. They are actors who never cease to surprise us. But in Jawaani Jaaneman they seem to try too hard to be cute and radical and all things that spice up life…at least for some. Others spend too much time burning the midnight oil, paying bills, looking out for discount sales to have fun.

Or at least the way the 40-year old protagonist of Jawani Jaaneman defines ‘fun’. For him, life is one big party. He parties and he f..cks. Sorry, there is no other more polite way of putting what Saif is shown doing. He loves to have a good time and when his long-lost-daughter (impressive debutante Alaya Furniturewala) asks him who lives with him in his pad, Saif drawls, “Just me and my swag.”

Oh, well. Our best wishes to both.

Neither is the dinner table conversation where Mom Farida Jalal (back after a long time) wonders if son Saif is gay because he won’t marry, as cute as it was in Dostana 11 years ago.

The very talented Kumud Mishra amidst a fit of giggles playing Saif’s turbaned brother assures Mom Saif is not gay. Just the opposite. Promiscuous to a fault Saif here plays what he played earlier in his career in Yeh Dillagi and then again in Dil Chahta Hai and more recently in mid-career in Cocktail. Jawani Jaaneman looks like just more of what we’ve already seen Saif do. It’s no longer funny to be 20 at 50.

That brings me to Tabu. The monumental actress here plays the hippy mother of Saif’s daughter. I thought flower children went out of style in the 1960s. Tabu revives the weed-smoking bead-sporting generation a bit late. Or maybe that’s the joke. A lost generation of lustful middle-aged characters behaving like wild oat-sowers in a film that must have seemed funny on paper.

In the trailer, Jawani Jaaneman just looks like a haggard matinee idol in an ill-fitting wig. 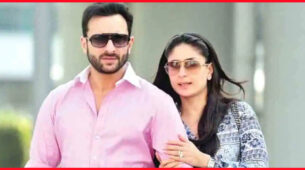