Rahul Dravid’s epic replies with his bat after getting hit with the ball... Almost every batsman who has played international cricket for a long time probably have got hit in the body at some point in time. Some buckle down after getting hit while others respond with their bat. Rahul Dravid was one who responded with his bat rather than his mouth. He was that cricketer who made crafted techniques through conventional means and made it work in international cricket; a technique so perfect and versatile that it suited all conditions.

Rahul Dravid is well known for fewer words and more action. The cricketer was never involved in any kind of controversy with any fellow cricketer. Sledging which is a part of cricket, Dravid never got involved in that as well. Whenever he has to respond, he let his score or his shots speak. In an ODI match, he was hit by the ball on his chest but he didn’t sledge or even glare at the bowler. He just looked on and on and the next ball hit a six which was like a tight slap on the bowler’s face. There have been so many instances like these. Dravid has also displayed his fitness by ducking at the right moment to protect himself from getting hit by a fast ball and then responded to the bowler in the following ball with a boundary or a six.

Here is a video compilation of such epic responses by Rahul Dravid, take a look. 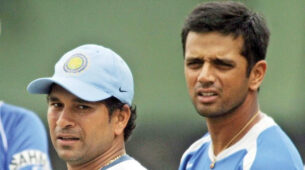