If you had to rate Parth Samthaan and Shaheer Sheikh on the hotness meter, which handsome hunk would top your list? Television industry has some of the hottest and most handsome looking stars that keep us glued to the serials every day, like clockwork. Two names that instantly come to mind when ‘hot actors’ is the topic are the sexy Parth Samthaan and the handsome hunk Shaheer Sheikh. Coincidentally, actress Erica Fernandes has paired up with both these actors and both the lead pairs were audience favorites!

Shaheer is immensely popular among the teenagers with a follower number exceeding two million and many girls are already crushing over him. With his good looks and stylish appearance, he is definitely one of the tough contenders for the spot of the top handsome hunk and could easily break the hotness meter beyond readings.

Parth is also an Indian Television actor who gained his popularity after playing the role of Manik Malhotra in MTV’s “Kaisi Hain Yaariyan”. He has one of the most active social media fan clubs and with his cute smile and charming hot looks he can easily make girls go wwea in their knees.

Both are equally talented but Parth has a more handsome and masculine look and with that really cute smile, Parth easily gets the place of “Top Handsome Hunk” from us. Shaheer on the other hand has a sense of raw masculinity and that ruggedly handsome look about him, which makes us want to rate him higher on the scales as well.

Maybe we can ask Erica Fernandes what would she rate her co-stars on the hotness meter as she seems to be the perfect person to judge and vouch for this one! 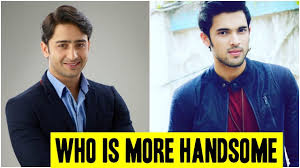