Federation of Western Indian Cine Employees (FWICE) and the Producer’s Bodies had a meeting regarding the growing concerns raised by the #Coronavirus at 3 PM today (15 March), in which the decision has been taken to halt all the shooting of all entertainment products.

This has been taken to tackle the concern of #Coronavirus and will be implemented from Thursday (19 March) to 31 March.

The decision has been taken by all associations to meet again for a meeting on 30 March to decide the future course of action.

IWMBuzz.com contacted J.D. Majethia, Chairman of IFTPC, and he said, “When the question is raised and asked about human life, there is nothing above and beyond it. We are in the industry of entertainment which is related to humanity. This is a human call. We always say ‘The show must go on’ but at a certain level, it cannot be appropriate to say. The show will definitely go on, but we have taken a break as of now. We are respecting Nature.”

Ashoke Pandit, Head of IFTDA said, “Yes, the decision has been taken to halt the shoot. Everyone is supporting the cause. One of the Presidents of the Worker’s Union was with us at the meeting. He is the President of Workers all over the country. So while the decision in Maharashtra has been taken, slowly the implementation will happen all across India.”

As per sources, “This will mostly be a decision taken all over India which will fall in place in the next few days. As for the airing on GECs, the shows will air episodes till the time they have their banks, followed by which certain arrangements will be made to fill up for it. Also the decision has been taken by taking the broadcasters also in consideration.”

Well, the #Coronavirus has given rise to an emergency and all measures will be taken yo keep the country and citizens in the best stead possible.

Stay on as IWMBuzz.com will keep you updated on more news on the same. 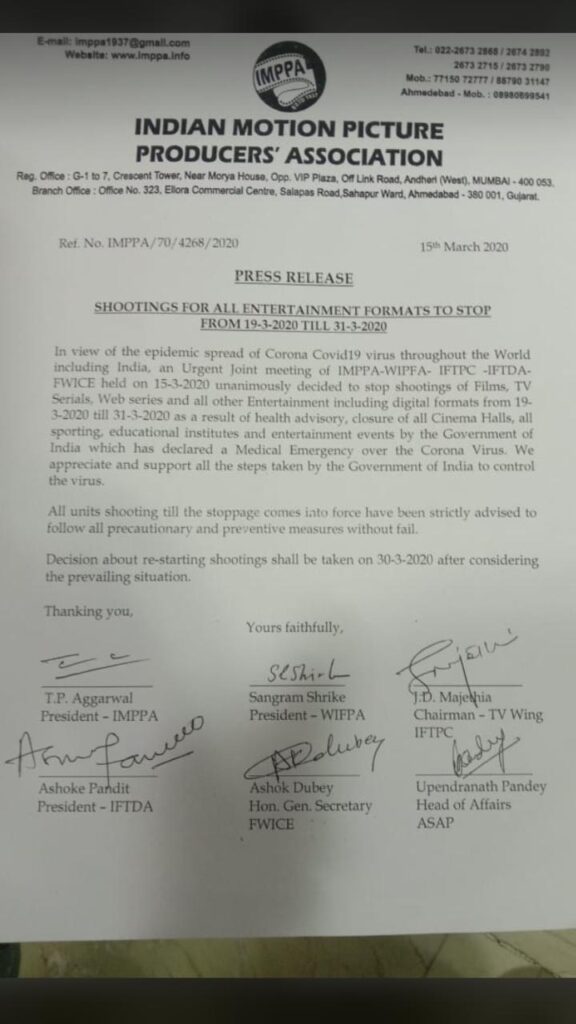