Mouni Roy had been inked to play the female lead opposite Nawazuddin in the movie. However, as per recent developments, Mouni Roy is no longer a part of the movie.

As per credible sources, producer Rajesh Bhatia has alleged that Mouni Roy and her agency’s conduct have been highly unprofessional and irresponsible, owing to which she has been thrown out of the movie.

Mouni Roy’s spokesperson has vehemently refuted the charges of unprofessionalism. In a statement to the press, he has counter-alleged that it is the conduct on the part of the producer that has been unprofessional and unbecoming. He has further conveyed that Mouni Roy has chosen to quit Bole Chudiyan rather than indulging in meaningless mud-slinging, and wishes them the very best.

It remains to be seen how this latest twist in the tale pans out.

In the meanwhile, stay tuned to IWMBuzz for any further updates on this story. 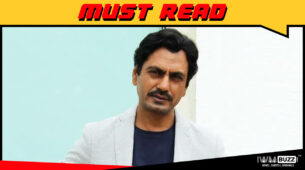