Check out the black looks of Reem Sheikh and Rhea Sharma! Every time she steps out of her home, casually or dressed up, she leaves all of us fascinated together with her fashion sport on point. Ditching her Kalyani avatar, she is exploring her western look and she slays in every outfit. She is very popular on social sites and she took to Instagram to share her picture in black. Without a doubt, Rhea Sharma is one of the most loved personalities in the television industry today. From being the saree-clad sanskari bahu in Tu Sooraj Main Saanjh to being a love interest to Shaheer Sheikh in Yeh Rishtey Hain Pyaar Ke, finally ruling the television industry with her on-screen performance as Mishti. The actress has also been a part of the Bollywood industry by making her debut in M.S.Dhoni: The Untold Story, where she portrayed the role of Sakshi’s friend, which was well received by the audience. Rhea Sharma is pretty active on her social media, and her gorgeous posts are a treat to her fans. Known for her features and good looks, Rhea always manages to look sizzling in her black outfits as she carries them well enough to be noticed.

Rhea’s style sense has always been the talk of the town, and today we bring you some of the best pictures of the diva. 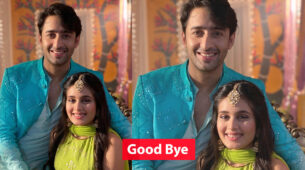