Samridhi Dewan, popularly known as Isha Sanghvi of Zoom Studios’ series, Imperfect gets into an exclusive conversation with IWMBuzz.com. Zoom Studios’ Original series Imperfect might be the debut work on the web for talented youngster Samridhi Dewan, but the ultimate precision with which she has enacted the character has been spot on!!

Samridhi who has been around, done work earlier has indeed made a mark for herself with this web-series wherein her on-screen character Isha Sanghvi realizes that ‘perfection’ is an overrated concept.

With an ability to effortlessly switch from one expression to another, whether it is happiness, disappointment, her awkwardness or the comic timing, Samridhi has excelled as an actor.

A perfectionist when it comes to her acting calibre, Samridhi has a long way to go and achieve many a milestones!!

In an exclusive interview with IWMBuzz.com, Samridhi talks about the show, her character, her real self and much more…

How does it feel to get appreciated for the hard work put in?

It feels so nice. There’s lots of love coming in from lots of people. That’s nice to see. I am literally jumping with joy.

What was the process involved in you bagging this role of Isha Sanghvi in Imperfect?

Basically, all started with auditioning wherein in my first round of audition, I had to speak the huge monologue that you see in the first episode of the series where I am practicing my proposal scene. When I read it, I found out that this character was not like me at all. It started with that, and I understood that this somehow had the potential to be a really crazy character and a very innocent person. That is what I tried to do in the first audition. Then we had the second round wherein it was a very long complicated scene which had three scenes put together. It required me to first be very upset at somebody and then going into another space immediately after and speak to somebody in a comic way and then it had to move on to a self-relaization state. When I read that, I jumped with joy; I love these kinds of scenes. When a scene is nicely written, there is so much that you can do with it. So I performed it the way it would look best, and they liked it.

What are the similarities or differences between Isha Sanghvi and your real self?

The major difference that I recognized pretty soon is that Isha has the capacity to fail and fail again, and immediately get up and try. I tend to go into a cynical ‘life is hell’ mode if something bad happens with me. There are many similarities though – Isha wants to have a wholesome life and same is the case with me. I want to have a great career, great job and a great relationship. This is something that everybody will relate to.

How do you see this big break that you have got with Imperfect?

This year I worked on another web series as well, but this is the one that was pretty much the protagonist of the series. It was a very different experience for me. I am happy that I pulled it off. Tell us about your career?

Basically I started acting pretty young, with stage. I majorly started acting in college, and then theatre in the Delhi University. So my main training has been on stage. And the most work that I have done has been on stage. In fact, I now start work on my next theatre project. I later started auditioning and wanted to explore the camera as well. I did few ads, after which Stories by Rabindranath Tagore happened. I played a part in Lucknow Central. I have been dabbling into different kinds of mediums and genres. I will keep learning with this process continuing.

As an actor, how do you approach a scene?

I think it is too soon in my career to answer this question (laughs). But I first try to find the character and I feel once you have found the pulse of the character, you can pretty much do anything in it. In Imperfect, we first found what Isha like, what her body language is like, how she thinks and how awkward she is. Once we found that, it was pretty easy to put her in different situations and see what happens. My Directors put in a lot into her and we were happy.

What is the genre that comes to you naturally?

I woud like to say all. Infact I enjoy all of it. I would say being Isha gave me a chance to do a lot of comedy. But a lot of drama happens with her as well. I would want to dabble into action now. I can promise you that.

I would love to get into movies. I also feel that the web has some amazing content happening. That’s very exciting. It is a great space for us newer actors, as it is lot more easier to reach this space when compared to films. Of course, I will love to be part of films. I have grown up watching films. I am very much open to all mediums right now.

We enjoyed the chemistry between Simi and Isha. So how was it working with an experienced actor like Sushmita Mukherjee?

I think it was amazing with her because she made it really easy for me. Even though she’s very senior, she made me feel very comfortable. She was like a powerhouse; she would come and we would know what to do. She was very supportive as well. We managed to find a good space to be together.

Imperfect also deals with the millennial problems with respect to love and life. How do you see it in real life?

As part of preparation for the role, what else have you done?

My Directors told me to watch a few things to understand the visual space of the show. Later I had to look into doing certain things to make the character look cool. It was very kind of the Directors to have involved me in the process of making Isha. With respect to the character, I had major discussions with the Directors and decided on the best.

What are you immediate plans now?

I am performing for a new theatre play in Rang Mahotsav in Pune which will happen in December. Also I am auditioning and looking at more opportunities on the web space. 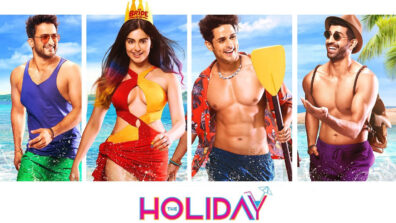 Being a newcomer I never thought I will be part of Hotstar series The Office: Samridhi Dewan