Review of What the Folks Season 2: Engrossing narrative with a strong message and fabulous performances | IWMBuzz
Digital | Editorial

IWMBuzz.com reviews the Dice Media series, What the Folks Season 2. 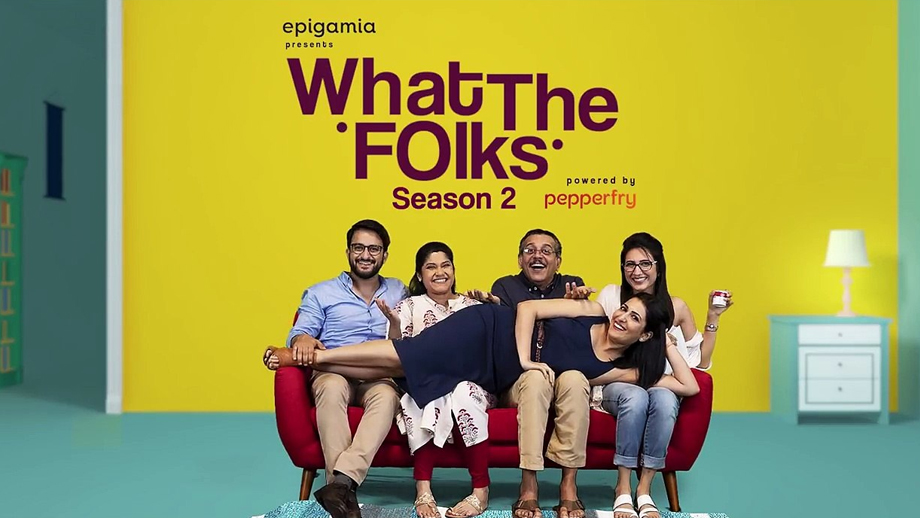 The Dice Media series, What the Folks in its first season saw Nikhil (Veer Rajwant Singh) dealing with uncomfortable, yet realistic situations created for him during his stay at his in-law’s place!! The series also saw his wife Anita (Eisha Chopra) balance mightily well between her parents and husband, in her bid to stand for the right!!

Now, the story of What the Folks Season 2 takes us into a brand new scenario, wherein roles are reversed and Nikhil and Anita play hosts to the former’s parents who come to stay with them in their newly acquired flat.

The best thing to happen this season is the introduction of extremely talented actors, Shishir Sharma and Renuka Shahane. Their scene in the car gives us the first glimpse to an alarming revelation that comes in the climax of the series. The fact that the father Kiran Solanki is getting treated for Dementia which results in slow decline in memory, is very craftily interpreted in the story line, without giving the main crux away.

Kiran Solanki’s histrionics with the passer-by on the road, their first meet up with bahu Anita, the secret behind the painting hung on the wall are really cute… One is certain to have a hearty smile.

The narrative yet again touches subtly upon the lingering health problem that Kiran Solanki has, when he gives a scary, blank expression as he requests the guy at the tea shop to help him with the name of the apartment his son resides in. The first episode also gives a faint hint to Nikhil and his sister Shreya’s strained relationship.

The second episode gives the Solankis a big surprise with Shreya (Kriti Vij) coming to stay over. And yes Nikhil and Shreya having a cold shoulder towards each other only add to the problems ahead.

However, the best scene in all the six episodes of the series has to be the one-to-one talk between the mother-in-law and daughter-in-law. An amazingly captured scene that drives home the simple fact that being perfect is not the need of the hour. Instead, in imperfection lies the beauty of life!!

‘Jo hona hai hone do, baaki sab cheeze jaane do’!! And the mother-in-law gives out the secret of happiness to her daughter-in-law that the ‘I Don’t Care’ attitude is the best way to lead life. A message that every saas-bahu of today needs to learn and accept. The ladies, Renuka Shahane and Eisha Chopra are commendable in the scene and play their parts effortlessly.

And there opens up another problem between Shreya and her husband Jason which is evident with Shreya avoiding his calls. And it is Nikhil who smells the rat… Nikhil musters courage to plan a talk with Shreya and the two of them have an outpour of emotions!! Another brilliant scene, should say. And the truth of Jason and Shreya going through a failed marriage spills out before the Solankis. And they are a shattered lot in quick time.

Amidst the sadness of Shreya’s marriage falling apart, the family leaves to attend the birthday party of Hamukh Khakha, the seniormost in the extended family.

The scene at the birthday destination puts Anita and Shreya together in one room wherein the two of them have a hearty conversation, and Anita for the first time expresses her dissatisfaction at work and her sacrifice of leaving her dream job only for Nikhil.

Also, the scene between the father and son where the father motivates his son to believe in himself and strive for success in life is well-etched.

Later comes the scene when Shreya leaves a hint of divorce while talking to a relative who himself has gone through a divorce. And in no time, the news spreads like wild fire, and with it, the relatives start to assume weird and irrelevant things.

The arrival of Jason (Shadab Kamal) into the thick of things upsets Shreya big time. And the two of them end up having a bad fight wherein Shreya literally calls off the marriage. And Anita unknowingly gets to be a silent spectator to the whole fight. Even before the elder Solankis try to help Shreya and Jason, the truth comes out in front of all assembled at the party when the wheel-chaired Hasmukh Khakha ridicules Jason and calls him a wife-beater. In a second, the pack of cards comes falling as Shreya, Jason and Nikhil get into a war of words. And in all this, a huge misunderstanding erupts between Nikhil and Anita too.

With all sorts of problems piling up, we get into the Finale episode of the series which hits the peak of emotions. Relationships seem to have reached the break point when things emerge again!! And it is simply inspirational to see them sail through and turn winners.

The final episode gives out the message that anything and everything has a solution if one decides to sit and talk it out. Nikhil keeps himself away from the mess by spending his nights in office. Shreya on the other hand becomes a loner, not allowing anyone to enter into her messy mind. Senior Solankis have nothing else to do than think of getting back home. Amidst all this, Anita is left to wonder where life is taking her.

So how do relationships get mended?

A pep talk from Kiran and Vandu to Nikhil does the trick to begin with!! By describing a horrible fight that happened between them years back, they tell their son that where there is love, no ill feeling can live long in a couple’s life.

And then Nikhil goes on to mend relationships that are messed up. He meets Anita at her office and apologizes for his mistakes. He calls Shreya to the same spot and they end up recollecting their good old times, their flaws, which eventually leads to them hugging and patching up.

And the Solankis again stand tall as one happy family!! But alas, the creative think-tank adds a new twist with Anita finding Kiran’s medicines which actually suggest that he is suffering from dementia, related to Alzheimer’s disease.

A gripping end to a fabulously told tale…

If there is one disappointment after watching the 6-part series, it is that the makers decided to keep it short and sweet. We would have loved to watch this tale go on for another few episodes.

Effortless!! This is the one word that we want to describe the performance the entire cast. Shishir and Renuka are so natural in their acting!! Amazing is their chemistry. Veer Rajwant Singh and Eisha Chopra have given remarkable performances. Their expressions are top-notch. Kriti and Shadab are on spot with their portrayals. Dhruv Sehgal as Nikhil’s friend, Rohan delivers well.

Kudos to the Director Ruchir Arun for the flawless narrative. Writers Anand Bhardwaj and Ayesha Nair have given a fabulously sweet message with their writing prowess.

To the Producers at Dice Media, Ashwin Suresh, Anirudh Pandita and Aditi Shrivastava, bring on the Season 3 of What the Folks pretty soon, as this is amazingly addictive!!

IWMBuzz.com credits What the Folks 2 with 4 out of 5 stars.

Dice Media is back with Season 2 of its hit drama series ‘Operation...

The expectation of audience in season 2 will always be more - Ayush Me...