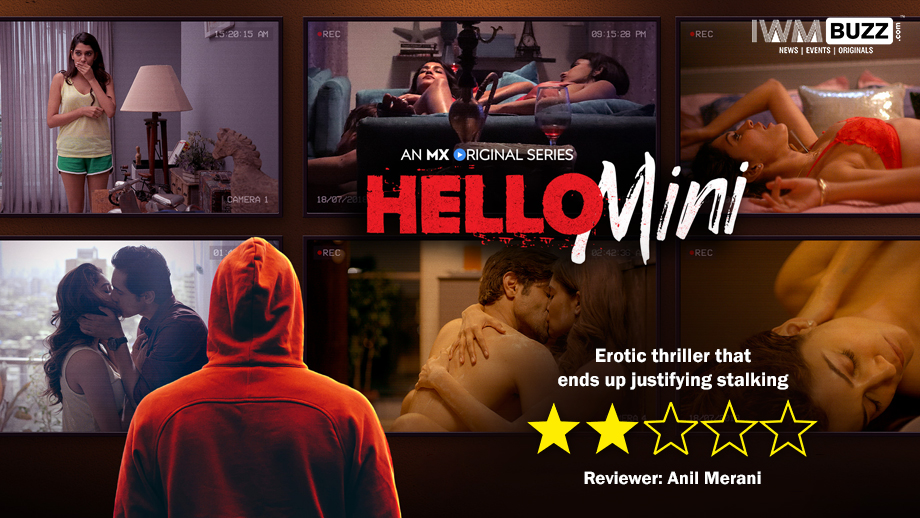 How would you feel if you were stalked 24*7 by someone (called stranger), who does not seem evil, yet holds cards against you. This, in a nut shell, is the story of the new MX Player web series, Hello Mini.

My biggest grouse against it is that it has ended up mixing a whole lot of topics (infidelity, BDMS sex and yes, rape) with the main issue of stalking. No wonder it took away from the horror a young girl would face when someone attempts to control her.

Can it be that stalking alone cannot justify the heavy uses of sex, which seems to be standard web fare? And here, the voyeuristic element went higher with lead character Rivanah Bannerjee, aka Mini (Anuja Joshi), putting her hand in her bottom inner wear to satisfy herself and also puts her hand in her boyfriend Ekansh’s (Anshul Pandey) pants in an open air BEST bus.

Here is the story-

Kolkata-based software engineer Rivanah shifts to Mumbai for a job. She gives Ekansh a brief glimpse of her breast and panty, but does not give him the full monty as he so wishes.

She then cribs to her mom about not ironing her fav blue top, but then mom says the iron man has misplaced it. But when she gets to Mumbai, her horror starts. She finds colored glass pieces, her missing top and cryptic messages (connect the dots in the end).

Rivanah’s Mumbai-based sister attributes her stalking fear to some accident, for she is unable to find the stalker’s (called The Stranger) phone messages. So someone remotely or physically accesses her handet, should that not ring an alarm bell? The fact that a smart girl like her does not go to the cops about her privacy being invaded sends wrong signals to other victims (link in the end again).

In office, she meets her colleagues who use tech slang as double meaning innuendos. Her obsessive HR Vedant (Arjun Aneja) also seems to be too close for comfort, always asking her out. And last but not the least, boss (Joysen Gupta) is a classic case of OCD.

Rivanah leaves her sister’s apartment to escape her sis and jiju’s constant bickering and moves into an apartment shared by 2 girls – one is the inquisitive spiritual chanter Asha, and the other is sex-crazy airhostess Ishita (Priya Banerjee).

Interestingly, when Ekansh, who is supposed to live in Bangalore, does not allow Mini to party, Ishita question’s whether the same rule applies to him as well.

The next day, both Mini and Ishita party, drink and yes, snort dope as well. So, according to web series, the new mantra of women’s liberation is to drink, do dope and get laid, left,right and centre.

Ishita also puts on social media the video when Rivanah, in a drunken stupor, tells off Ekansh that she will not be his doormat anymore.

An angry Ekansh, after refusing to talk to her for 24 hrs, lands up in her flat, where they finally have proper sex.

But soon Rivanah finds out that he is not only in Mumbai but is also two-timing her. The loser had the audacity to turn up at her flat to convince her to come back, but Ishita gives him a dressing down (using your junk on other women type of lingo).

The entire world is about to fall on her. Apart from the stalker, she has a cheating boyfriend now. She also becomes a witness to rape.

During the office party, she becomes a bit cosy with the pesky Vedant, but then stops herself. He then blackmails her, using the video tape of their incomplete escapade. But surprisingly, the stranger comes to her rescue and helps to turn tables, in return for testifying against the above rapist. The scene where she compels Vedant to not only apologize but also put in his papers was fun (his story has not yet ended).

But the all knowng blackmailer gets jealous when she goes out with her hunky neighbour Danny. The joke about him hurting his pvt part was standard adult content.

She also makes out with Danny on an open road (why not bedroom?). The story then takes off on a real tangent, where the stranger further keeps getting Mini out of bigger scraps. He goes back to her past remember the accident?). We will not say anything further, why don’t you watch it for yourself?

This in a nutshell is the story of season 1.

Anuja acts well as the girl who wants to have a good time, yet is a bit coy.

Priya Banerjee represents the classic modern girl who does not mind being used as a keep, as long as her boyfriend pays for her lifestyle. The justification of being used as a young girl does not cut much ice.

Towards the end, Ishita does lose some of her mojo.

According to the makers, both Anuja and Priya were chosen, for being NRIs, they would be less coy about the bold scenes. Other desi girls, it’s time to show who is the boss in bold as well.

Agreed, Ishita might have experimented with swinging both ways, but Mini should have been shown questioning her sexuality, given her middle class moorings. Gaurav hardly has much to do so far. He is only there for kinky lovemaking.

The scene involving Danny and Rivanah’s traditional Bong fathers was fun. Also,how she tries to hide the condom from her dad was so Indian.

The duo of producer Goldie Behl and director Farukh Kabir has done a good job of crafting a thriller that keeps you on tenterhooks. The visual effect and taking had all the hallmarks of a classy Applause product.

But yet I keep harking back to the main point that it is morally wrong to justify stalking, as we know it can destroy someone’s life. I have not read the source book, Novoneel Chakraborty’s Marry Me Stranger, so will not comment on it. Interestingly, Novoneel is also the writer of Hello Mini.

Also, 15 episodes is too long, especially if you want to promote binge-watching. P.S. I know I went on and on, but kya karen, the exciting series and story deserved a longish explanation.