Review Of Kasaai: Robs The Theme Of Honour Killing Of All Drama And Dignity | IWMBuzz
Subscribe Now
Digital | Editorial 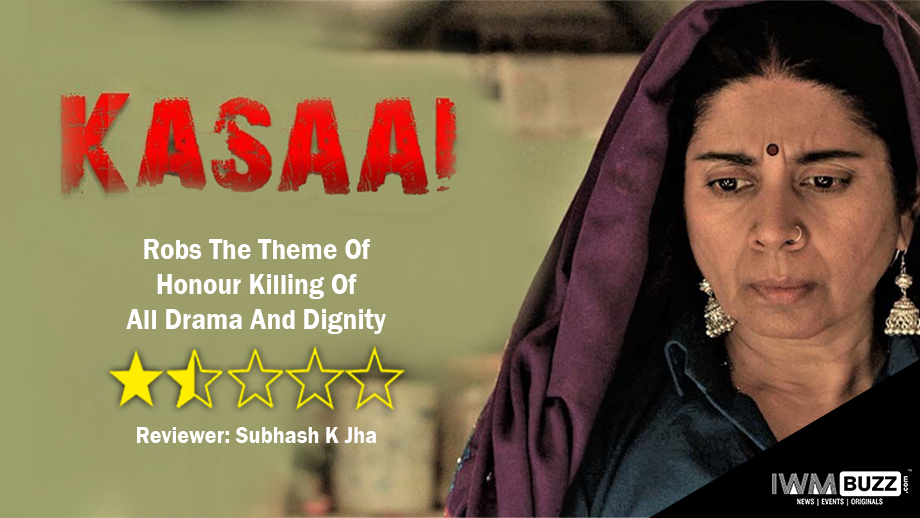 Noble intentions when cloaked into a cascade of clichéd socio-political issues can prove calamitous in a film. Kasaai proves it. For all its well-meaning jibes at patriarchal tyranny in rural Rajasthan, the film is as parched and dry as the wells in the deserts.Whatever its honourable purpose of existence, the film falls apart completely as it limps towards a finale which sets our teeth rather than our bums on the edge.

The main purpose of watching this film is the exceptional Mita Vashisht who plays a fiercely protective grieving mother of a slain son (Mayur More). On paper this must have sounded like a dream role for the underused actress. In execution, the subject spins out of control and there are segments in the narration where the screenplay is so clunky I could hear the sound of plot falling to the ground.A marital rape shows up as an afterthought in the litany of socio-political grievances.

At one point the writer wants to bring the the three main female characters together to demonstrate Nari Shakti. The women converge as though they’ve bumped into each other at a bus stand. There is no feel of a momentum, no sense of innate drama in the cinema .

The episodic movement of the story suggests a Doordarshan serial chopped and arranged into a 90 minute film that feels 60 minutes too long. What we are meant to feel is dread. What we experience is a narrative that is dead.

There have been some exceptional films on honour killing in recent years. The one I recall as being unusually chilling and unforgettable is Rahul Dahiya’s

G Kutta Se.In Haryanvi and partly in Hindi, the language of oppression that debutant director spoke in this bludgeoning masterpiece left me speechless. This extraordinary film derived its unhampered persuasive powers not from posturing but from ripping apart all our perceptions of what cinema is and should be , by entering the nervous system of a patriarchal community where women are still not given the right to choose their partners.There is no honour in honour killing. But there is an illimitable amount of honour in a film like this.

Kasaai robs the theme of honour killing of all drama and dignity.Some of the actors try hard to breathe life into the inert drama. Except Mita Vashisht no actor seems comfortable in the environment of artificial tension. One of the actresses who plays the dead son’s girlfriend wears so much makeup as though to compensate for her co-star Vashisht’s stark appearance.