In conversation with Sheila Sandhu At a time when web only means sex, watching a short film espousing the importance of adoption comes as a whiff of fresh air. Malaysia-based producer director, Sheila Sandhu’s labour of love, called Acceptance, which had been winning multiple laurels in the film festival circuit has just released on the well-known Pocket Films platform. This 15-minute short features theatre, TV and film artist, Priyanka Panchal, and choreographer, Rajeev Surti.

“Being an adopted child myself, I am very happy that my message, which asks for adopted children to be given more love, has been well received, getting over 2 lac views in just 72 hours,” says Sheila, who has been working as a Bollywood line producer in South East Asia for a while now.

“Priyanka is really talented. Her performance as a new mother will go a long way in further establishing her acting credentials. Rajeev was eager and responded well to the scenes put forward to him in his debut short film and was very receptive to our direction.” Talking about the web platform, Sheila, whose second short on cancer has also released today on Pocket Films, says, “It is not easy to make a web-based short, given budgetary and recovery limitations. But yes, it lets you say what you want. I want to make many more socially relevant films, and this early success only encourages me to work even harder.”

Di, as Sheila is known, adds, “I always knew that the web had great potential; it just needs makers who are ready to go beyond semi-porn and use this freedom available to tell some great stories.”

Priyanka, who has done several plays and acted in shows such as Mahadev, Phir Subah Hogi and Love by Chance, says, “It always feels superb when your efforts and hard work are recognized. I have got lots of messages appreciating our underlying motto; what more can we ask for. I just hope more couples opt for adoption.”

“Sheila is just like my mother and we had a great time shooting,” She ends. 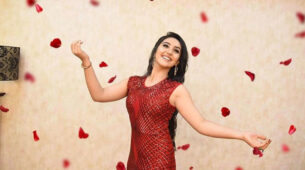 These pictures of Ashnoor Kaur prove she is one Television hottie