TSP released the first episode of the 3 episode series Zeroes 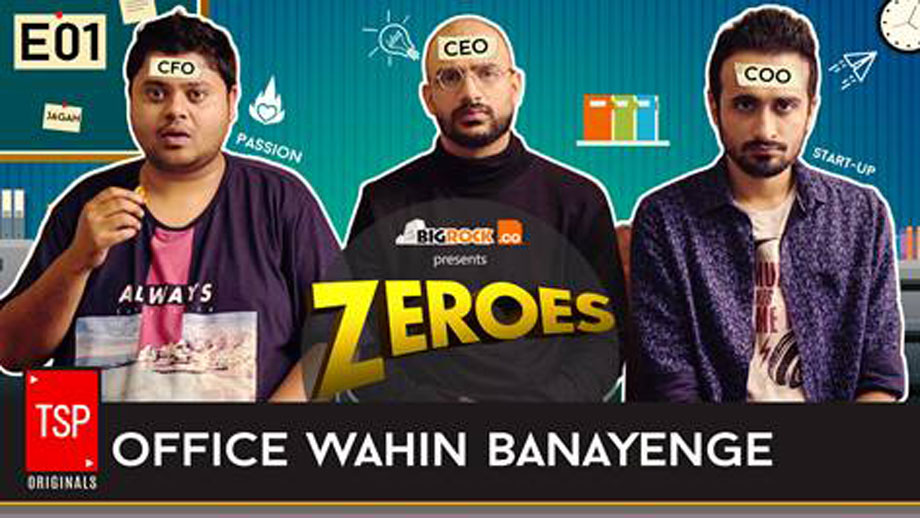 When we say 4 people trying to do a start up the first thing that pops up in the mind is Pitchers. Well that’s what motivated our SINGLES’ (an established TSP property) to step out in the sun and begin with their own startup. Badri, Shivankit and Abhinav, later joined by Jassi, are on their own in the startup world now and the reality is a lot different, wacky and overwhelming than they expected. Watch the trailer here.

TSP released the first episode of the 3 episode series and it has already crossed 1mn views in 3 days. Episode 2 releases on 9th Feb on TSP’s Youtube Channel.

Parikshit Joshi, Writer – Zeroes, says: As a writer I loved creating characters who are a little delusional about themselves, just like me. The fun thing about these characters is that they can do pretty much anything without knowing whether it’s right or not. And this time, these four delusional characters were thrown in the world of start-up.

Talha Siddiqui, Writer – Zeroes, says: For me, Zeroes is about the story of characters who create an impression of having ‘No Value’. You would never want them in your team. But if these Zeroes are placed properly, the more zeroes you have on your side, the bigger you are.

Shreyansh Pandey, AVP – Content Strategy says: After recently crossing 1 MN subscribers on the channel, we are coming up with our second web show ZEROES which revolves around 4 average guys trying to start-up. TSP is known for it youthful humor and that’s what we’re trying to do with this show as well. That’s why, we are trying to experiment with these characters who we describe as sometimes hungry, always foolish.

At BigRock, we are always looking at ways to simplify the process of getting businesses online. With internet penetration in India reaching over 450 million users, the need to get online is now more important than ever before. In the past year, India has seen an influx of over 1000 tech startups alone. A major part in the journey of building a brand begins with finding the right domain name”, says Shashank Mehrotra, Managing Director, APAC at Endurance International Group (EIG).

“Through our partnership with Neustar and TVF, we aim to reach out to young Indian aspirants who may have groundbreaking ideas which can be turned into successful businesses, but very often do not know where to start. We believe we can help them kick-start their journey by offering them a .co domain name which is not only widely available, but also demonstrates credibility when networking with investors and customers.”

Be Younick Fan? Test Your Trivia with This Quiz!

After YouTube VS TikTok, all you need to know about CarryMinati's Yalgaar video: Read Details

OMG: Amitabh Bachchan has no idea who is CarryMinati, asks 'what is carryminati'