Shruti Shrivastava of Viu’s Kaushiki says her character is intriguing. Model and actress Shruti Shrivastava, who is currently seen in Viu’s popular series Kaushiki, has stolen many hearts with her performance.  Currently, the series is at its peak, and in the latest episode, Shruti’s edgy character – Aditi, crossed boundaries by trying to murder her own friend.

Also, the character has been quite intense and complicated, wherein she’s been seen fooling her so-called lover Maggie (Omkar Kapoor) while she is into a relationship with DK (Namit das), all for the sake of money.

Speaking on her role’s dodgy behavior, Shruti said, “If I met someone like Aditi, I too would have been fooled (laughs). She is a very smart and intelligent girl, but she will never let anyone know what a con she is. My character is intriguing, and even though it’s a grey shade one, I enjoy playing it a lot.” 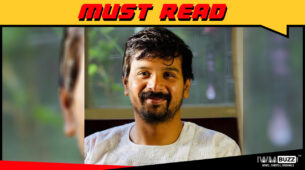 Aarya has to be my best working experience till date: Sikander Kher

I went the opposite direction to who I am to play Jawahar in Aarya: Namit Das