The evergreen beauty, Jennifer Aniston was stunned to see her name tattooed on a fan’s hand… One of Hollywood’s most loved stars, Jennifer Aniston, has been the envy of women all over the world as she manages to stay fit as a fiddle and at the top of her game even at age 51. She has been included in the world’s most beautiful women and rightfully so. From her TV show FRIENDS, Jennifer Aniston has been an absolute favourite all around the world and is also one of the highest-paid actresses in Hollywood. Jennifer Aniston’s impeccable style and her beauty have always been alluring.

The gorgeous actress in extremely emotional and giving by nature. When she was in Toronto, Canada for the Toronto International Film Festival in 2014, she was leaving from a venue where her fans and media were waiting to get a glimpse of her. The fans were asking her to open the window of her car and squealing in excitement. The actress opened the window and was waving to her fans when a fan called her out and said that one of them had her name tattooed on the hand. Jennifer Aniston turned to them and reacted surprised and filled with gratitude and said, “Oh my God!” The fans were on cloud nine to see her in person and with her reaction. 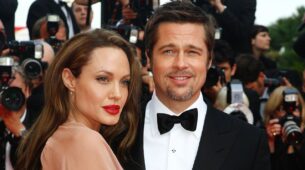