Ram Gopal Varma and his cheap antics to gain publicity It is saddening to see such deplorable and abysmal fall from grace of once a famed storyteller. It’s a classic tale of moss and froth over intelligence. It’s a case of desperate attempt to gain limelight riding on crass creativity when merit is tawdry and ludicrous.

It’s a case when someone loses his marbles. Take a walk of shame Mr Ram Gopal Varma for cinema lovers and your fans are left ashamed in ignominy, thanks to your repetitive futile brazen acts of buffoonery.

The creator of cinematic gems like Satya and Company, is now relegated to realms of filmmaking which is nothing but nudity and vulgarity. Ramu, as lovingly called by many, has become a blot on Indian cinema, a farce in the name of freedom of expression. His cinema is akin to that dirty ugly little burp that makes one’s muscles twitch in disgust after having a meal which is unbearingly unsavoury and grotty.

Mr Varma has had no major hits since a decade and it seems, constant failure has made him desperate.

In creative fields, one can always choose to express opinions via art, and there is no harm in it. Arnab Goswami in his debates welcomes diverse opinions. However, the utter disgust and shock was the first look teaser poster of Ramu’s endeavour.

It uses Arnab’s face against a naked woman and we must say, it’s incongruous and loathsome.

Is that the best you can do Ramu? That’s all you got between your temples? Is this what the master filmmaker has become? A joker whose dance brings no joy, but pity and plight.

Fight it out, but fight with grace. Ramu, your fans deserve better. What a shame!!! These acts of infamy make you look like a publicity hungry defeatist sadist shoddy person who is radarless in life.

When Ramu released the teaser, one senior industry person said, ‘Who takes him seriously, anyways…”

Well, the joke is on you Ramu. Do you get it? 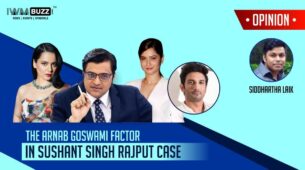 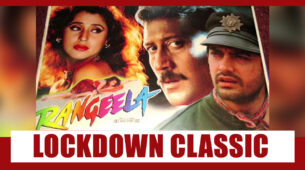