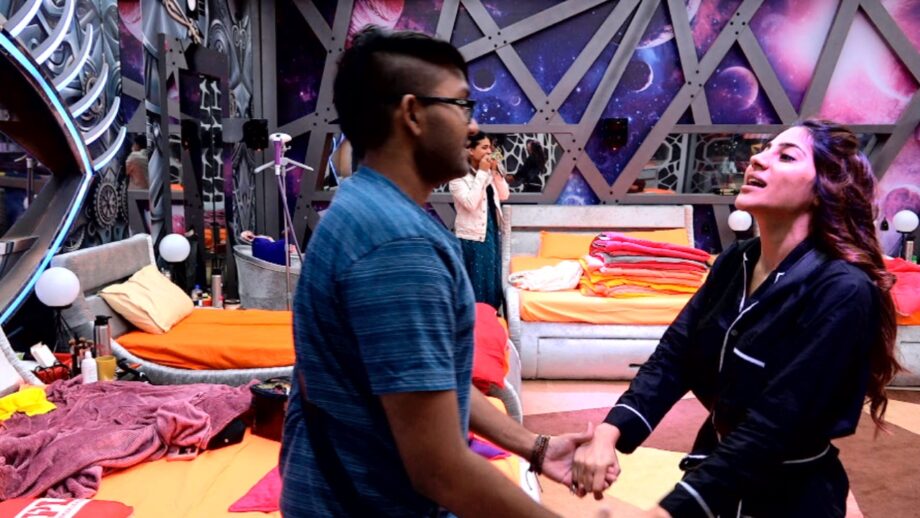 After a turbulent and highly competitive ball collection task the previous day, Eijaz Khan, Nishant Singh Malkhani and Pavitra Punia emerge as winners. The trio now has the opportunity to take their personal belongings from the BB Mall. The task continues the next day and the remaining contestants are paired against to complete the task. Jasmin who was upset the previous day and had lost hope of getting her things back from the mall gets extremely charged about the task. Rubina, Abhinav and Sidharth Shukla boost her morale and tell her to give it her all in her upcoming clash against Nikki Tamboli.

As soon as the task begins and Nikki and Jasmin start collecting the plastic balls, Nikki attacks Jasmin first. After this, Jasmin refuses to go easy on Nikki and the two slug it out and there is a major tug off war between them. Once the buzzer rings, Hina Khan supports Jasmin and thinks that Jasmin has won the task. Sidharth Shukla, on the other hand,supports Nikki. He blames Hina that she is being unfair and they get into a huge argument as both their tempers flare up. It will be interesting to see how the seniors will now come on a common ground.

Later in the day, Nikki Tamboli teases Jaan Kumar and calls him her brother. Jaan gets irritated and tells her not to call him her brother. Nikki challenges Jaan to learn a song for her and come back and only then she will accept his friendship. Jaan Kumar takes the effort and learns the song from Hina Khan. Will Jaan be able to win over Nikki?