Avneet Kaur is a notable Indian TV performer, artist, model, and YouTuber. She began her career from the reality show, DID and made a more noteworthy name for herself as a performer. She is from a Punjabi family, Avneet Kaur had appeared in a 2011 sequential, Meri Maa, where she played a character called Jhilmil. Following that, she portrayed the role of a little girl on SAB TV’s Tedhe Hain Par Tere Mere Hain. She has also been a part of Zee5’s web-arrangement Babbar ka Tabbar. She has likewise done an excellent Bollywood film, Mardaani, where she co-acted with Rani Mukherjee.

In the event that you recollect the grand famous show, Yeh Un Dino Ki Baat Hain, then you must be a fan of Ashi Singh! Much the same as the show, the entertainer has been a significant talk in the industry from that time. She is one of the most venerated entertainers in the TV industry. After the show Yeh Un Dino Ki Baat Hain, she is right now playing the role of Yasmine in the sequential, Aladdin-Naam Toh Suna Hoga.

And today, we are awestruck with their V-Neck fashion updos. We are absolutely enraptured with their hot looks in this picture and can’t help but go gaga. Here are the pictures, check them out and let us know who you think looks the sultriest! 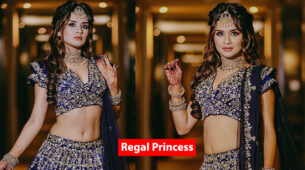