Review of Girliyapa’s Mr and Mrs: Replete with sparkling witticisms and snarky dialogues 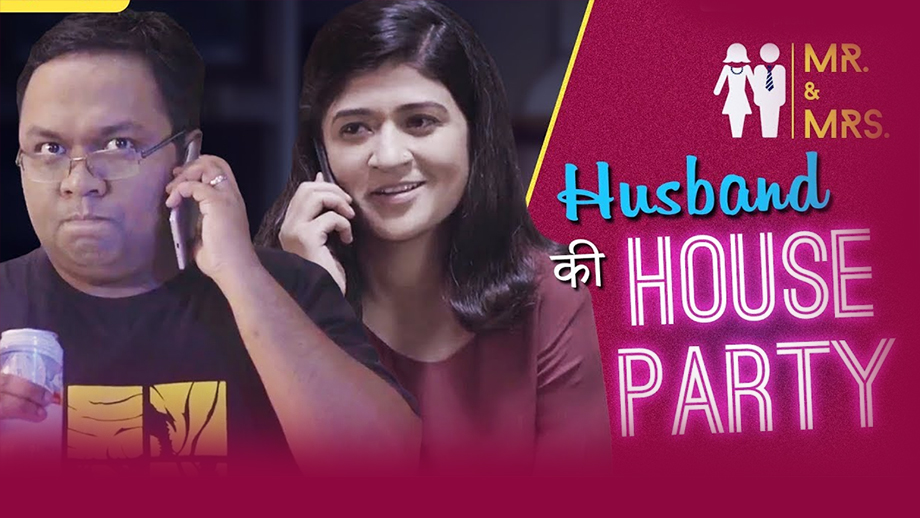 “All men make mistakes, but married men find out about them sooner.” This quote by Red Skelton perfectly sums up the world of Madhu and Sanjay, the protagonists of Girliyapa’s Mr and Mrs, a comical take on married life. Written by Biswapati Sarkar, the king of intelligent humour, this 3-episode web series is replete with sparkling witticisms and snarky dialogues. To whet your appetite, here are a few brilliant ones- “Paapi ko paap ka praschit karne ka prospect to do, don’t keep a paapi puzzled yaar”, and “Guilty plead kar raha hoon..guilty sleep kar raha hoon…par guilty feel nahi kar raha hoon”……hilarious!

While the series deals with the usual perils of married life- angry wife giving the dreaded silent treatment to the husband for a guilt he is unaware of, lingering desire of the husband to sink back into the comfort of bachelorhood in the absence of the wife, good-natured ribbing between the two, intruding mother-in-laws, what makes this series so uproariously funny is that the husband-wife duo go about it with witty repartee and sharp one-liners as their armour. Light-hearted, breezy and gently refreshing, the series gets one into a great mood even when one is screaming blue murder! It is like a gust of pleasant wind that blows over the worst of storms. Get the gist? Well, we hope you do, coz our quota of analogies runneth over.

Each 10-12 minute episode leaves you in splits and is so engrossing that time literally flies; the episode is over before you even realize it. The series features the usual suspects, Nidhi Bisht as Madhu and Biswapati Sarkar as Sanjay. Madhu could oh-so-easily have come across as screechy and shrewish, but Nidhi Bisht’s understated and measured performance lends subtleness and style to her role. She mouths her lines so matter-of-factly, that the viewer is drawn into the episode. Heck, you feel as if you are sitting on the couch in their living room, watching them slug it out, instead of watching it on a screen. That’s how compelling is the series. Once raw and unpolished, Nidhi has matured into an accomplished performer with each outing, just like vintage wine, that gets better with age. We like.

And Sarkar, is, of course, outstanding. His writing, brimming with subtle, intelligent humour; his acting, sloshed with hidden nuances and chutzpah; and his amazing screen presence, make us mighty glad that this IIT-Kharagpur alumni dropped his corporate plans to make a huge splash in the world of humour and comedy. Engineering’s loss is the comedy-lover’s gain. We could go on and on about Biswapati’s writing, the wisecracks and the one-liners, if space permitted. Watch the series and you’ll know why we, and the online community, are going ga-ga over it.

The three episodes screened until now are titled Husband Ki House Party, Biwi Ko Gussa Kyun Aata Hai and Truth and Dare with Mother-in-law. The peeps at Girliyapa have put up one episode each month, since the series’ launch in January. The wait is too long, guys! How we wish they could put up a few each week. Once a month is not enough to satiate our lust for awesome comedy. Yeh dil maange more of this light-hearted, refreshing Mr and Mrs banter. So, giddy up and bring it on, guys!