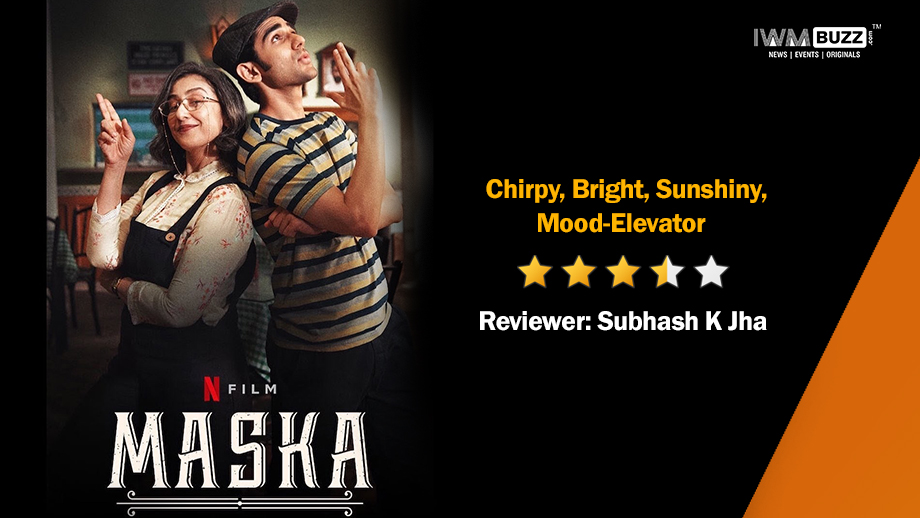 If we disregard Manisha Koirala’s overdone Parsi accent and the rather embarrassing plunge into excessive maudlinism in the second-half, Maska is quite the chirpy, bright, sunshiny mood-elevator that we need during these hard times.

This is not the first film to take us into the world of quaint and cute Parsi eccentricities, and I hope it’s not the last. Given its reliance on stereotypical community quirks Maska does well for itself. The film is propped up with some intelligent writing and rock-solid performances especially by newcomer Prit Kamani who is quite a find. Manisha Koirala gets everything except the accent right. While Javed Jaffrey as her dead husband is a complete natural, accent and all.

Kamani plays Rumi, heir to a crumbling Irani café whose mother Diana will only allow him to sell the expensive property “over my dead body”. Rumi can’t wait that long. He has dreams of becoming a Bollywood star and he wants to self-fund a film where he would be cast as a leading man.

One can see Rumi is not the brightest of candidates for on-screen hero-giri. He allows himself to be bullied by his overbearing mother (Manisha Koirala) and a super-ambitious girlfriend (Nikita Dutta) who thinks it is okay to sell your heritage for your dreams even if it makes you unhappy. Because according to her, happiness will follow later. High hopes, indeed.

Kamani plays Rumi with a sense of melancholic innocence. He is ambitious but not quite clued-in enough to support his ambitions. In one hilarious sequence, he walks into a film audition stark naked because it’s the role of a man caught with his pants down. This chap is way too earnest and roast-worthy. But Rumi is kind generous and compassionate. Kamani is able to convey all of this. It’s quite a debut performance.

Armed with a gallery of quirky (Parsi) characters director Neeraj Udhwani does well for himself. The film is suffused with the scent of sunshine. The positivity of mood makes us overlook many of the film’s glaring transgressions, like the melodrama of a dying man feeding bread maska to his beloved wife, and the manufactured climax which does nothing to reiterate the overall sense of joie de vivre that the film projects.