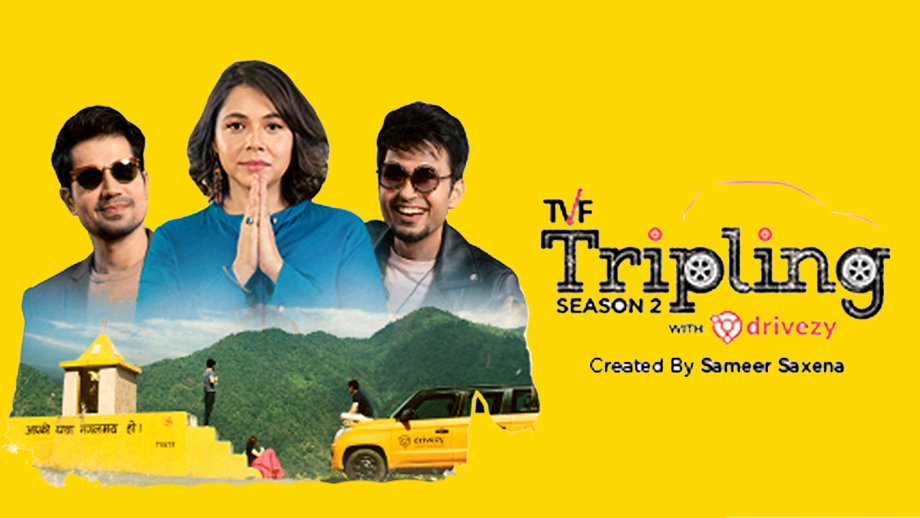 For all the impressive and inspired storytellingthat populates the current web-scape, the old-fashioned emotional kind of storytelling, with its warm sensibilities and sentimentalist appeal, has still not lost its charm. Hence the allure of Tripling, which in its second season continues to lull viewers into a state of happy contentment, with its timeless tale of sibling love-cum-rivalry.

While Tripling Season 2 can hardly be called a work of blinding virtuosity,it definitely is an example of subtle, refined artistry; artistry that tells a sweet, charming tale of siblings, who though apparently forever at loggerheads with each other, share an adorable and unbreakable bond of mutual affection.

So, for those of you who’ve been living under a rock, Tripling tells the tales and travails of the Sharma siblings – eldest Chandan (Sumeet Vyas), youngest Chitvan (Amol Parashar) and the middle one, Chanchal (Maanvi Gagroo). Having first released it in 2016, the good guys at TVF are back this April with its second season, titled, Phir Se Tripling (uninspired, we know….happens with the best of us), which also streams on SonyLIV and MX Player. This season, quite like the previous one, has been written by Akarsh Khurana and Sumeet Vyas, while Sameer Saxena helms directorial duties.

Whereas normal siblings bond over normal things such as movies, music, games and sports, the Sharma siblings bonds over…..road trips! It is a throwback to their childhood, when vacations meant just one thing – road trips, a norm established by their father, Chinmay Sharma. Only thing being, their road trips are not the practical, planned ones we are so used to watching in numerous road-trip movies (think Dil Chahta Hai, Zindagi Na Milegi Dobara). Nope, their road trips are crazy on-the-spur-of-the-moment escapades they are compelled to embark upon, to escape from the latest soup they’ve landed themselves in.

It so happens that Chandan and Chitvan bump into each other while taking a pee in the restroom of a public place. Chandan is now a renowned novelist on the back of the hit book he’s authored, called Tripling. Yes, it takes its premise from the siblings’ previous road trip, the one we are familiar with, courtesy Tripling Season 1. The book has hit a nerve among the hoi polloi and is raking in the numbers. It is even being adapted into a film, that’s how successful it is.

Chitvan has changed. Gone is the happy-go-lucky hustler of yore, to be replaced by responsible ‘house husband’ to super-rich lawyer/activist, Sheetal Gujral (Kubra Sait, in a delectable cameo). He’s even become adept at playing father to a cute bub he loves to call Cheetah Sharma. Even as Chitvan is laidback and larky, loves his music (MadaFaka is his anthem) and his food, Sheetal is domineering and dictatorial, solemn and schoolmarmish, vegan too, and with a penchant for taking ‘live music’ to a different level altogether –which makes their relationship all the more astonishing. Perhaps this quirky relationship merits a spin-off of its own.

To get back to the story, even as Chitvanis thrilled to be the hero of the book and its movie adaptation, its success has wreaked havoc in Chanchal’s life. The book harks back to that hilarious moment in time when Chitvan had asked naively, “Jijajibanjhhai?” (banjh is impotent in Hindi); Jijaji being Chanchal’s husband, Pranav (Kunal Roy Kapur), a legit royal of Jodhpur.

This one line from the book and the movie has antagonized Pranav’s ‘praja’ and also his political party, of which he is MLA. He steps down from MLA-ship and Chanchal is made MLA in his place. The trouble begins when Pranav goes missing. Ashamed by the suggestion that he’s impotent, he’s gone incommunicado.And his wicked, power-hungry BhabhiSa (Nidhi Bisht) wants to implicate Chanchal in Pranav’s murder. Chanchal is suitably miffed with her elder brother for his no-holds-barred book that has turned her life upside down.

The only way the three can save their skins from the baying-for-their-blood praja and the hot-on-their-heels police is to find Pranav, pronto! And thus they embark on yet another eventful journey, criss-crossing dusty roads, picturesque towns and breath-taking locales. Their journey takes them to Lucknow, Kolkata and finally to Sikkim.

The Lucknow one is the best episode of the season, if we may.It features flavour of the season, Gajraj Rao (courtesy his charming turn as a forty something to-be dad in Badhai Ho) as Nawab Sikander, aka Prince Alexander, a relic residing within a relic. His wife Zainab (Shweta Tripathi, in another eye-catching cameo) is well-read and wise, and enamours Chandan with her intelligence. Meanwhile,the Prince’s manservant, Chilla (Jeetendra Shastri) enamours Chitvan with his sutta, chillam and luscious drinks. Chilla is hilarious,as is the Prince; and the scenes within the crumbling mansion hold you in thrall, until it’s time to move on to the next stop.

Rajit Kapoor makes an entry in Kolkata as private investigator Satyanveshi (Truth-seeker), who hates being called detective. The cameo is an interesting throwback to everyone’s favourite nineties show, Byomkesh Bakshi. Throwback is an apt term to use – from the wi-fi router, complete with irritating sounds and all, to the computer and the fax machine and more, you get the feeling you’re back in the nineties. What’s with Sameer Saxena and Akarsh Khurana’s nineties fixation, we really do want to know.

While Tripling 2 is amusing and quite a fun watch, what it lacks is the laugh-out-loud humour that made the first season such a joy to watch. The comedy this season seems more contrived, especially Chitvan’s patent, “Baba, you’re beautiful”. It seems unnaturally forced when he says it this season – more like an addendum to invoke the nostalgia of the mega-successful first season than anything else.

And oh yes, it’s not only Baba that’s beautiful, but all three siblings. In fact, the painfully honest fact is that the good-looking trio is one of the reasons why viewers are hooked to the franchise. Amol Parashar, in particular, is a sight for sore eyes, as is Sumeet Vyas. Maanvi Gagroo is not bad either, though we must say that the men steal the show outright.

Kunal Roy Kapur is adorable as the poor little Prince, seeking peace of mind. We would have loved to see more of the parents this season too. Charu (Shernaz Patel) and Chinmay Sharma (Kumud Mishra) were spectacular as the with-it parents in Season 1. This season also makes mention of the song from the B&W movie, Saraswatichandra, that has inspired the names of the siblings, when BhabhiSa sings it with disdain. Nidhi Bisht is superb as Pranav’s crook Bhabhi.

Lastly, some things need to be said and here we say it – Sumeet Vyas and Maanvi Gagroo are consummate actors, without a doubt. But it is Amol Parashar who really impresses in Tripling 2.  He’s eminently watchable and sparkling as Chitvan. If the other two are the heart and soul, Parashar is definitely the life of the show.

What makes Tripling 2 a worthy watch is that it doesn’t get sickeningly sweet at the end, it is not your regular preachy family show and it doesn’t attempt to sermonize. It is refreshingly irreverent and disarmingly honest – the story of every sibling ever.Its gentle bickering and sassy banter make it what it is – a stirring nod to realistic sibling relationships.