It is obvious that when we see the same thing done by the two different personalities somewhere in our mind, we start the comparison of who did it better. It’s quite common in the world of acting and fashion as the outfits and the movies are often repeated or being a remake. Today, we have Arshad Warsi who is asked to choose between the two films- one in which he starred alongside Bhumi Pednekar in Durgamati and the other in which he saw Anushka Shetty performing in Bhaagamathie!

Recently, when Arshad Warsi was asked about the comparison on whose act he liked the most among Bhumi Pednekar and Anushka Shetty, here’s what he has to say!

We saw Bhumi Pednekar’s journey in Bollywood was full of a roller-coaster ride. She had few down moments but most of them she converted to the ups. She has been very talented on-screen and has given us many moments to appreciate her. Recently, her recently released OTT film Durgamati is making the headlines. She played an IPS officer in the movie. While on the other hand, Anushka Shetty’s Bhagamathie was the original film and Durgamati is the remake of it. Anushka Shetty’s daring and badass avatar in the film was loved by her fans. The film made her a sensation and is along with the most counted contribution of her career. The film had a few horror stuff too.

Now you must be wondering why Arshad Warsi is here among the two divas! Well, he played a politician in Durgamati and has seen closely how Bhumi Pednekar worked. He has worked with her and when asked about Anushka Shetty, he said he can’t say about the experience with her as he was not among the cast but he appreciated her for her outstanding work. It is very difficult to adjust the roles as per their mental, emotional, and physical ability, and that was seen with perfection in both- Anushka Shetty and Bhumi Pednekar. 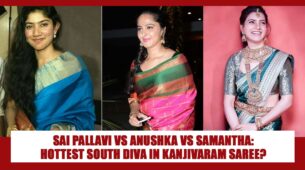 Anushka Shetty Vs Pooja Hegde Vs Hansika Motwani: Who Is The South Actress With HOTTEST belly curves?